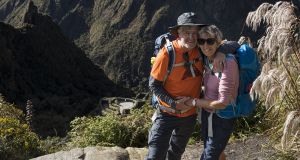 Phil Crean and his wife Gillian live in Playa San Juan on the west coast of Tenerife, but they also get away from the perfect climate there. Here they are in Peru last year.

Phil Crean left Dublin in 1983, spent 11 years in London and moved to Tenerife in 1994. He works as a freelance photographer and lives with his wife Gillian in Playa San Juan on the west coast

The weather is great, especially in the winter months – temperatures on the coast never drop below 12 degrees. This means life is lived outside as much as possible. Our terrace is our living room. We live on the coast, which I love as there are plenty of coastal walks within easy reach, and if we want something more adventurous, an hour’s drive takes us into the mountains where we can spend a day wandering the old tracks that linked the villages before the advent of motorised transport.

Where is the first place you bring people to when they visit Tenerife?

Usually a walk around the front of Playa San Juan. You’ve got the Atlantic to one side and just across the road there is a great selection of cafes, bars and restaurants. I also always want to show people the Las Canadas del Teide national park, a Unesco World Heritage site where you will find the highest mountain in Spain and incredible alien landscapes. It is not surprising so many sci-fi movies have been filmed here.

The top three things to do in Tenerife that don’t cost money, are . . .

Walking on the thousands of paths through the amazing volcanic landscape.

Swimming in the sea – water temperatures rarely drop below 20ºC.

Making photographs of all the rugged scenery and exotic plants.

Where do you recommend for a great meal that gives a flavour of Tenerife?

We are very lucky to have a huge selection of places to eat, covering all budgets from basic menu-of-the-day meals costing around €10 up to Michelin-starred restaurants, which are still very good value when compared with the cost of eating out in Ireland. My favourite restaurant is Marsala in front of the beach in Playa San Juan. The location is unbeatable with views over the fishing harbour and the food is amongst the best available – fish, meat, rice dishes and a great selection of wines served by Vicki, who has possibly the the most charming smile on the island.

Where is the best place to get a sense of Tenerife’s role in history?

The capital, an hour up the motorway is Santa Cruz where Nelson lost an arm, and the battle, in July 1797. You can visit the small castle next to the modern Santiago Calatrava-designed auditorium, and then take a 15-minute stroll to the Museum of Nature and Man and learn all about the original Guanche people who inhabited the island. On the way back, stop off in Candelaria and see the basilica housing the Black Madonna, patron of the island, and the impressive statues of the Menceys, ancient kings of the island.

What should visitors save room in their suitcase for after a visit to Tenerife?

Tenerife wines have improved enormously in the past 10 years and are now winning awards. I would definitely recommend taking a bottle or two home to rekindle memories of your holiday with a nice meal.

If you’d like to share your little black book of places to visit where you live, please email your answers to the five questions above to abroad@irishtimes.com, including a brief description of what you do there and a photograph of yourself. We’d love to hear from you