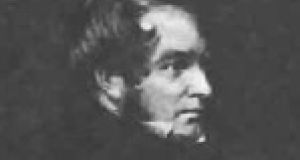 On Christmas Eve 1796 a vast French fleet, the Expédition d’Irlande, lay off the Munster coastline awaiting a break in the winter blizzards. Their plan was to disembark more than 13,000 soldiers to spearhead an invasion of Ireland that would bring an end to British hegemony and establish an Irish Republic. However, it was not to be; though a smaller force would land in Connaught two years later.

Seven years afterwards the newly crowned French Emperor would attempt his own invasion, though it too came to nothing. How surprising then that by the mid-1820s, members of the imperial Bonaparte dynasty could be found living in Ireland and their marble engraved coat-of-arms could later be viewed above the entrance to one of Waterford’s grandest homes. However, their arrival in Ireland was not the result of a successful military campaign but rather a political one.

Princess Laetitia Bonaparte, daughter of Prince Lucien Bonaparte of Canino and Musignano and niece of the Emperor Napoleon, arrived in Waterford in 1825 as the wife of Thomas Wyse, an aspiring politician and leading advocate for Catholic emancipation. The couple had met during Wyse’s grand tour of Europe and married in Italy in 1821. Wyse aspired to become the political leader of the Irish Catholics and felt that such a prestigious marriage would help bolster his credentials. The sizeable dowry of £10,000 her father promised would accompany the union may also have been a deciding factor. The couple, though poorly matched, would have at least two sons together, Napoleon Alfred Bonaparte-Wyse and William Charles Bonaparte-Wyse before they inevitably went their separate ways, though as a devout Catholic Thomas never sought an official divorce.

She moved to London in 1828 and they would never meet again. He became distant from his sons whom he left to by raised by his brother and sister-in-law, and his wife would go on to have a further three children with a British army officer, which caused him great embarrassment. He went so far as to meet with her cousin, Emperor Napoleon III, to ask him to intercede and prevent her from claiming the children were his own. The emperor agreed to pay off his cousin’s debts and provide her with an annual pension if she did so, though she doesn’t seem to have taken heed of this demand.

After his wife’s departure Wyse threw himself into politics and following the Catholic Relief Act of 1829 was elected to the House of Commons the following year for Co Tipperary. Alongside his long term rival Daniel O’Connell, whom he considered lacking in integrity, he became one of only five Roman Catholics to win a seat.

Once elected Wyse made the provision of education his primary focus and that every person regardless of religion or class should have the opportunity of “bettering his being, and augmenting with his stores of knowledge, also his faculties and happiness.” He argued that multi-denominational schools should be established in every parish in place of the numerous jails, workhouses and asylums which he asserted were only conducive to the creation of “intellectual deserts”. Later Wyse would be elected as an MP for the city of Waterford and became one of the first two Catholics to serve in a British government in modern times when he was appointed a Lord of the Treasury by the Prime Minister Lord Melbourne in 1839.

After his political career came to an end in 1849 he was made a Privy Councillor and immigrated to the newly independent Kingdom of Greece where he took up office as British minister plenipotentiary (effectively the British ambassador). He arrived in Athens during a period of great tension between the British and Greek governments. After attempting to claim compensation for a British subject whose home had been plundered by an incensed mob in 1847 he was eventually able to secure a settlement but only after the British navy was instructed to blockade the Greek ports by the foreign secretary. Wyse is also credited with keeping Greece from allying with Russia during the Crimean War for which he received a knighthood from Queen Victoria. When Sir Thomas died in 1862, King Otto and Queen Amalia ordered he receive a state funeral and he was buried in the catholic cemetery in Athens. Despite his attempts to prevent it, his estranged wife and sons would inherit the family estates in Waterford and the imperial eagle would greet every visitor to the Wyse manor of St John’s for generations thereafter.