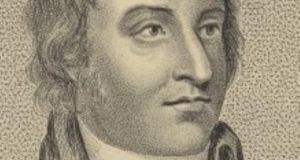 George Waldron, later known by his alias George Barrington, is perhaps one of the finest examples of poacher turned game keeper of the 18th century. A notorious thief and rogue he has been dubbed the “Prince of Pickpockets” by his biographers but later abandoned his life of crime and ended his days as a chief constable, charged with enforcing the law upon all those who would break it.

Like most thieves and con men, multiple accounts regarding Barrington’s early life exist – a situation he himself likely encouraged. However, it is widely accepted that he was born in Maynooth, Co Kildare in October, 1755 and was the son of a local silversmith, Henry Waldron. A member of the Church of Ireland, he benefited from the patronage of the local Anglican clergyman who helped secure him a place at a Dublin grammar school. At the age of 16 he was badly beaten during a fight with a classmate. He retaliated by stabbing his attacker, for which he was flogged and his name ruined. Rather than continue his education and earn a place in university, he stole £10.50 from the headmaster and a silver watch from his sister, and fled to Drogheda, Co Louth. Low on money and with no support network to fall back on, he took a job with a wandering group of actors led by John Price, a known swindler wanted in England.

In exchange for the limited money he had left, Price and his band took Waldron in and taught him how to perform and, more importantly, how to pick pockets. He proved to have a natural talent for it and utilised his skills as an actor to present himself as a gentleman, which allowed him to pickpocket far more lucrative targets. In 1773, Price was arrested and George Barrington, as he was now known, left for England. For the next two years the “gentleman pickpocket” enjoyed great success and often stole from his unsuspecting victims while dressed in a disguise. He was particularly fond of dressing as clergymen. Like most thieves, Barrington’s luck finally ran out in 1775 when he was apprehended trying to steal a jewelled snuffbox from a Russian prince at the Covent Garden Theatre. He managed to talk his way out of prosecution on that occasion, but was finally arrested and sentenced to three years hard labour in 1777. He was freed after only 12 months but soon found himself in jail again aboard a ruined ship. Feeling particularly low we’re told he tried to end his life but received a pardon soon after thanks to the intervention of a wealthy patron.

Realising that he was simply too well known in London at this stage, he moved back to Dublin and later to Edinburgh to try his hand there. His silver tongue and network of powerful friends meant he was frequently acquitted if caught in the act, but his return to London in 1790 heralded his downfall.

After attempting to steal a gold chain and watch from a spectator at the Enfield racecourse he was tried at the Old Bailey where, despite an impassioned defence where he is noted to have pleaded that “many of the crimes of my life ... happened absolutely in spite of myself,” he was sentenced to seven years transportation to Australia.

He arrived in the Sydney aboard the Active in September, 1791 and was sent to work in Toongabbie where, rather than do hard labour, he managed to convince his overseers to give him a job with the police guarding the government stores. He received a conditional pardon the following year and by 1796, he received a full pardon and was made High Constable of Parramatta. There he acquired a 46 hectares (114 acres) of land and retired in 1800 after nine years as a policeman. He died four years later.

After his death numerous stories and crimes were attributed to him though most of them have since proved to be fabrications. What we can say is that this petty criminal did achieve a level of high renown in both Great Britain and Ireland, and that after arriving in New South Wales he does appear to have genuinely reformed his ways. If nothing else, he is also a prime example of how far fine clothes and an eloquent manner of speaking could go towards keeping you from prison, more often than not. This genteel pickpocket remains one of the most notable con men of the Irish diaspora.