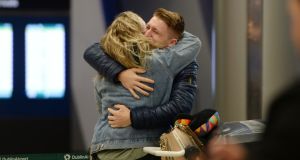 Dublin Airport arrivals hall in 2019. This year, many prefer to wait outside and peer through the glass. Photograph: Alan Betson

I couldn’t sleep the night before coming home from London. I’d checked into my flight back to Ireland only to find that the plane was full. After muddling through the year without knowing what the end of 2020 would look like, the reality of it had me on edge.

Concerns about my wellbeing had been raised by my fiancee and parents in recent weeks. I’d been on high alert for so long that it had ground me down. This year has been the longest I’ve gone without seeing my parents, and I’ve lost count of how many times they wished for me to be home. I couldn’t even remember when I’d last touched a human who wasn’t my wife-to-be.

As many are finding, it’s difficult to accept something is “non-essential” when every part of your being says otherwise.

London is a hyper-connected place brimming with possibility. But when those possibilities are paused, and your sense of community doesn’t extend beyond the front door, being cooped up in a small apartment starts to feel untenable. That left me stuck between yearning to see my family and being terrified of the consequences of trying to do so.

The journey home compounded those fears. Between getting into a taxi and stepping on the plane, seeing casual attitudes toward face coverings and social distancing made me feel less than safe. When British Airways handed out complimentary snacks mid-flight, practically inviting every passenger to remove their masks in unison, I just closed my eyes and turned up the volume on my headphones.

On arrival in Dublin, the atmosphere felt tentative. Instead of the warm welcomes normally associated with the arrivals hall in December, most people preferred to wait outside and peer hesitantly through the glass.

I heard someone belt out a verse of We Wish You a Merry Christmas and turned to see a group of six embracing. As they commemorated their reunion with a selfie, their breath vaporising in the cold of a foggy night, I cringed – but I didn’t judge them for it. Getting to that point has been a complex journey.

Before the first lockdown, I remember calling my parents as they relaxed one sunny Saturday at a hotel in Roscommon. My frantic warnings made it feel like the parent-child dynamics had been reversed. “Don’t be wasting your time worrying,” my mum said.

It’s hard to believe now but, back then, people were talking about the outbreak passing in a matter of weeks. Then reality hit. My fiancee and I decided to postpone our summer wedding by a year, cancel the honeymoon, and bunker down in uncertainty.

But as the rate of infection dropped, my apprehension didn’t. We don’t have a garden or a car, so my only connection to the outside world was bringing out the bins or going for a walk – and walks invariably left me in a worse mood than before.

I couldn’t live with myself if I brought the virus home. But adapting to the pandemic has meant accepting just how much is beyond my control

Our local park took on a festival atmosphere. I couldn’t understand how people could seem so carefree. Why we were the only ones wearing masks or walking onto the road to keep a safe distance? Our downstairs neighbours, meanwhile, seemed to exist in an alternative reality. Their regular lockdown parties convinced me that this pandemic was going to reveal a lot about human nature.I have anxiety. It’s a deep-rooted issue that has left my inner threat-detector working on overdrive. I’m also an asthmatic who has bad memories of struggling to breathe as a kid. I did not want to add agoraphobia to the list. That’s why I reluctantly eased myself back into society by tackling one basic experience at a time. Haircut in a barber’s. Groceries in a shop. Dinner in a restaurant.

I was training myself to manage risk, but also to suspend judgment and foster some compassion for others. You never really know what’s going through the mind of someone who appears to be carrying on as normal.

We all have coping mechanisms. My neighbours’ strategy is to party like there’s no tomorrow. Mine is to imagine every possible scenario until the worst ones loom largest. What if I stay in London and my parents catch Covid-19 anyway? What if this turns out to be the last family Christmas and I miss it? What if one of my parents passes away before our wedding finally goes ahead?

I couldn’t live with myself if I brought the virus home. But adapting to the pandemic has meant accepting just how much is beyond my control. I can’t stop my parents from going to work and seeing people. My siblings have their own lives and don’t want to be lectured about being careful.

My fiancee managed to get home to her family for a month during the summer and planned to join their bubble at Christmas. So my choice was to see out the year alone in the same apartment, satisfied that I’d followed protocol at the expense of my mental health, or isolate in advance, get back to Ireland as safely as possible, and then quarantine.

The expats I know felt the same way. A relative in Hong Kong was determined to defy three cancelled flights and make the 20-hour trip home with his newborn daughter. A friend in Germany planned to drive back to Ireland (via ferry) with his wife and child in a camper van, which they’ll quarantine in. A friend in Holland booked a house on Airbnb to isolate with his own family before having his relatives join them.

On and on it went. None of these people are under the illusion that this is going to be a normal Christmas. They just want to see their loved ones. The consensus is that as long as you take every possible precaution, it shouldn’t be a problem.

So that’s what happened. I quarantined for five days and took a PCR test, which came back negative. As good as it feels to be back home, I’m mindful of all those who can’t do the same. I’m mindful of the frontline workers who’ve pushed themselves to the brink, of people isolated in care homes, of those who have lost loved ones and couldn’t attend the funeral.

I’m not advocating for everyone to come home, but I do believe the first lockdown bought the Government enough time to prepare for this situation better

I’d barely been home a day when I checked in with a friend who wasn’t coming back. She’d booked flights only to decide against returning to a household full of at-risk people. When I shared how conflicted I felt about the whole thing, she helped me see it from a different perspective.

Yes, there are people pointing fingers over Covid-19 as a way to vent frustration. But those people probably haven’t been cut off from family and friends all year. “Looking after your mental health is not to be dismissed,” she said. “If you follow all the appropriate protocol then you’ve nothing to feel guilty about.”

Personal dilemmas aside, the official guidance has not been helpful. A recent report by the European Centre for Disease Prevention and Control stated that air travellers are not a high-risk group for spreading Covid-19. The National Public Health Emergency Team (Nphet) has been emphatic that people should not travel, but the Government has been more ambiguous.

In mid-November, when Nphet’s figures showed that foreign travel accounted for just 1.36 per cent of total confirmed cases in Ireland, the Tánaiste said it was “too soon” for people to book flights home. It’s hard to see what an open-ended statement like that achieves apart from causing a bottleneck in late December.

The reality is that international travel has been permitted all year. On the passenger locator form that you’re required to fill in before arrival, “travelling with an essential purpose” is, ironically, an optional box to tick.

I’m not advocating for everyone to come home, but I do believe the first lockdown bought the Government enough time to prepare for this situation better. Instead, it feels like politicians have been reluctant to take a firm stance, leaving people in the difficult position of weighing up the risks to their loved ones against the potential cost to their wellbeing.

Friends of my family – people I don’t even know – have been in touch to ask about how to quarantine. A surprising number of them didn’t realise that it takes an average of five days for Covid-19 symptoms to appear. The placement of testing facilities at airports has led many to assume that paying for an optional test on arrival could put them in the clear, but if you pick up the virus on the journey, it won’t show up in the results.

Even when you get home, the hard part isn’t necessarily over. Midway through my bedroom quarantine, my dad phoned me from the livingroom to check if I was okay. I could hear the tenderness in his voice as he said: “It seems like such a waste to have you here and not see you.” No official guideline can prepare you for moments like that.

As uncomfortable as it is for me to express any of this, and as much as my views won’t reflect those of everyone returning for Christmas, I wanted to share some reasons why the holidays may be harder to navigate than expected. It should be a time of increased vigilance... and also a time of increased understanding.

Frustration is in the air and it will be easy to scapegoat the returning diaspora when cases inevitably rise in January. But an atmosphere of blame can itself be a danger to public health. If we can’t be more sympathetic to individuals’ situations, we could reach a point where people avoid testing or even hide the fact that they’ve contracted the virus out of fear of being judged.

For some, coming home this Christmas may be the riskiest but most urgent travel of their lives. Anyone who treads that line as responsibly as possible deserves to be treated with a bit of compassion.