Win the youth vote with pollock tostadas and jalapeño salsa

They may be trendy, but these dishes are quick and easy to assemble too 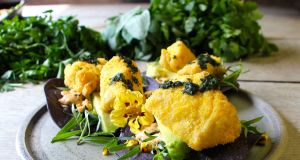 I used to be a complete purist when it came to watermelon. Who else loves that watermelon scene from Dirty Dancing? In my opinion, the melon was the real star of that movie.

I never really bothered with the vodka-soaked watermelon in college, that stunt where you and your student mates cut a bottleneck-sized hole out of the rind and jam the open bottle into the fruit, which soaks it all up. This theoretically creates a portable keg filled with the finest Russian hooch, but in reality it is a waste of a good watermelon.

I preferred to experiment with the classic Jamie Oliver pink onion and watermelon feta salad, which instantly gave me a whole new perspective on the giant fruit.

I think it must be an age thing when you start liking fruit and meat combinations – things such as mince pies at Christmas. It seems to happen around the same time you start giving out yards about the young ones and their fashions. You might also find yourself liking hipster ginger beer and beginning to worry about how much you have to do tomorrow, and going home at a sensible hour instead of having another one for the road. It happens to us all.

It’s a middle-age thing, I guess. Like when I’m chatting to the chefs at work, and it hits me that nobody on my shift has heard of TLC or knows who AC/DC are. You have now officially turned into one of your parents’ mates, the one who was always trying so hard to be hip.

This is where these pollock tostadas come in, with their tangy, trendy jalapeño salsa. You will definitely impress your young friends with this one. All that’s left to do then is to make up a big jug of paloma (a Mexican cocktail made with tequila, grapefruit, lime and soda) for everyone and dance the night away to TLC’s Waterfalls – assuming you know who they are, of course.

I use Blanco Niño blue corn tortillas, made in Clonmel, Co Tipperary. These are sold wholesale, but if you contact them at blanco-nino.com and fill out the contact form, they say they will help you source them. Otherwise use any good-quality corn tortilla.

Method
1. Put the pollock in a bowl and season generously. Sprinkle the polenta over the pollock, making sure each piece is evenly coated. Set aside.

2. To cook the corn, put a large pot of well-salted water on to boil. Once at a rapid boil, add the ears of corn and cook for five to eight minutes. Drain and pat dry.

3. Using a barbecue or gas hob, torch the corn over an open flame for two to three minutes each side, or until the kernels have an even char.

4. Remove from heat. Carefully remove the kernels by running a knife down the cob using a sawing motion. Set aside.

5. Make a chipotle mayo by mixing the mayonnaise with the chipotle paste and the juice of the limes.

6. Using a deep frying pan, add enough vegetable oil to cover the bottom of the pan completely. When the oil is hot, carefully add the tortillas two at a time, they should immediately start to crisp up and change colour. After two minutes, remove from the oil using tongs and set aside. Continue frying in batches until you have the desired amount.

7. Add your polenta-coated pollock to the same oil. Fry on each side for about three to five minutes until the polenta has crisped up and taken on a golden colour.

8. Assemble the tostadas by putting a dollop of chipotle mayo on each tortilla, then some of the pollock. Add a handful of rocket and coriander and sprinkle with the charred corn.

Method
1. Start by pickling the red onions. Put the lime juice, vinegar and sugar in a shallow bowl and season generously with sea salt. Whisk the pickling liquid until the sugar is dissolved.

2. Add the sliced red onions. Make sure they are all evenly covered but do not mix or toss the onions – this releases the pectin and makes the pickle slimy. Set aside. The onions will slowly change colour to a bright pink.

3. In another, larger bowl combine the watermelon, cucumber and nectarine. Season with salt and pepper and drizzle over a little olive oil. Lightly toss and add the leaves.

4. Transfer to one large or four individual serving dishes and garnish with the pink onions. Serve as a light starter, side salad, or top with crumbled feta for a more substantial main course salad.

Method
1. Combine all the ingredients in a large bowl.

2. Season to taste. This salsa can be pretty spicy, so add less jalapeño if you like it milder.

Still got chickpeas to use up? Try this crowdpleaser
10

What happens if a tenant can’t pay rent during the Covid-19 crisis?
Real news has value SUBSCRIBE