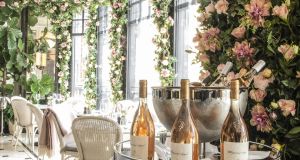 Wilde at the Westbury is offering rosé wine-tasting flights.

All is rosé in the Westbury

Everything is coming up rosé on the terrace at Wilde restaurant at Dublin’s Westbury hotel. One of the prettiest dining spots in the city just got even more attractive with the launch of a rosé wine-tasting flight, the introduction of new menu dishes to pair with those wines, and a stunning backdrop of a pink floral installation by Appassionata Flowers.

Sommelier Philip Dunne has selected four French wines for the rosé tasting, served in 75ml pours (€25), including the much-lauded Whispering Angel, from Provence. The restaurant’s cocktail list has taken on a pink tinge, too, and there is also a pink cider from Craigies and red fruit beers from Lindeman’s. Suggested food pairings are tuna sashimi and roasted tiger prawns. Everything’s Rosé at Wilde runs until the end of July.

A taste of California in Adare

On Sunday, July 7th, Adare Manor will host a wine-tasting and dinner, featuring wines from three of the most sought-after producers in California. Wine writer John Wilson says: “Sashi Moorman, winemaker and owner of Domaine de la Côte in the Santa Rita Hills, is renowned for his Pinot Noir. Pax Mahle is owner of Pax Wines, producers of some of the finest Syrah from Mendocino and the Sonoma Hills. Steve Matthiasson, of Matthiasson Wines in the Napa Valley, produces an array of excellent wines from less-known varieties.”

All three will be present at the tasting and dinner to guide guests through their wines. The evening will start with a wine tasting, followed by a seasonal menu created by head chef of the Oak Room, Mike Tweedie. Tickets are €95 per person and can be booked by telephoning 061-605 271 or by emailing guestrelations@adaremanor.com.

Bastille Day celebrations at the Conrad Dublin hotel run from July 12th-14th, Friday to Sunday. There are French-themed promotions throughout the hotel during this period including a French cheese selection and two glasses of Lagarde Rouge Grenache Syrah for €25 in Lemuel’s; moules frites for €10.50 in Alfie Byrne’s bar, and a crêpes Suzette station in the Coburg brasserie (8-10pm, €12).

Yoga instructor Lucybloom Webb and Ballymaloe-trained chef Alice Tevlin, who have been friends for 20 years, are launching a series of mini retreats that will mix yoga practice with a three-course plant-based dinner. The first takes place on July 18th at the Mill Studios in Harold’s Cross, Dublin 6, from 6-10pm, and costs €75. Places can be booked online at theyogafeed.com.

Pop down to Cleggan

Sinead Foyle and Philippa Duff have joined forces to open The Sea Hare, a pop-up cafe at Joyce’s pub in Cleggan, Co Galway, which will open every day until the end of September (10am-6pm). Located right by the pier from which the daily boat to Inisboffin departs, the cafe will serve breakfast, lunch and afternoon tea.

Once a week, on Thursdays, a long table dinner will be available to book at theseahare.ie. Just 24 seats are available for each of the dinners, which run until the end of August. The menu will be created around whatever seafood and seasonal produce is available, and will cost €42 per person.