The Seafood Cafe is Niall Sabongi’s best place yet, a bigger canvas for his seascape 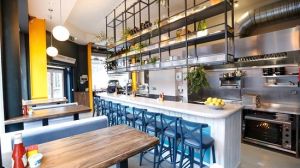 There are several reasons this place shouldn’t work. It’s an all-day cafe putting it out there seven days a week at the rackety end of Temple Bar. Sam Stephenson’s old Central Bank building tunnels a biting wind around its outdoor tables and much of the walk-by trade are toting rucksacks the size of small children in search of cheap, fast eats.

It’s the typical scenario of white van delivers pre-prepared staples to be heated or fried and served to a passing crowd, most of whom will never darken the door again. No one feels the love but the accountants get a warm glow.

But this is a whole different bucket of Dublin Bay prawns. The Seafood Cafe is Niall Sabongi’s third city-centre outlet, his largest. He started with nearby Klaw on Crown Alley, a crab shack so small it would make a rush-hour Dart feel roomy. Then came Poké on Capel Street, less poky but still tight as a kitchen in a house party. But here on the corner of Fownes Street there’s space and light, oodles of it and a new love letter to the salty stuff that surrounds us and all it produces.

“Island nation” is spelled out in pink neon on one white painted wall in this casual place. Anything that hasn’t been painted white is painted blackboard black or swirly anchor blue, and much of the seating is in high bench booths and bar stools.

For many years you had to spend big to eat good Irish seafood, either on the air fare to France or Spain, or on a very posh dinner. Thanks to Sabongi and others (Jumoke Akintola and Peter Hogan’s Fish Shops on the northside) sustainable Irish seafood got democratic. Here they do fish and chips but it’s made with Arklow plaice rather than generic who-knows-what white fish diced into interchangeable slabs of marine protein. There’s a snack called  “When I was Six,” which costs €6. It is, Sabongi explains, the taste he remembers when he was six. (“Yes, my tough Dublin childhood,” he grins). Whole prawns are threaded nose to tail on to a wooden skewer and fried just enough so they get buttery crispy bits on the outside but keep all the fluffy sweet cold water prawn flavour that makes them a different eating experience to their tropical tiger cousins. It’s a snack that’s going down in my book as “When I was 47”.

I’m here with my friend and between us we have five boys, one of whom has just decided (worryingly) that lobster roll is his new favourite lunch. Not the mayonnaise and garlicky herby buttery lobster they generally do here but just the brioche with plain lobster meat. It’s a starter lobster roll, which the kitchen is happy to prepare.

It’s my second visit. I came here before Christmas for a last-minute dinner and it was the only time I had entered a Klaw enterprise and not found Sabongi on the premises. But even when he wasn’t there, the food was great and the place was, inexplicably, half-empty.

What works so well here is the raft of little tasty touches added to all the simple dishes. There are chunks of watermelon in the tap water, candied walnuts in a gorgeous Lambay crab and apple salad, chervil fronds clinging to the mushrooms and prawns on toast along with flat-leaf parsley and butter making this the city’s best open sandwich. The spears of long-stem broccoli are as well cooked as I’ve had in much more expensive restaurants. They’re finished with a charring in oil and and a rubble of toasted hazelnuts because turning a duty green into a delight is how this place rolls.

There’s a neat bowl of macaroni cheese for the boy who decides to paddle his own canoe away from the choices that involve anything that once swam.

It might be fashionable to turn away from small places once they start to grow into mini empires. Many a mom-and-pop beginning has been packaged into a hollow concept formula. But The Seafood Cafe is Sabongi’s best place yet, a bigger, beautiful canvas for his seascape that is the best and simplest of ideas, putting world-class Irish seafood onto plates at reasonable prices.

Lunch for seven with tap water came to €94

Food provenance: Oysters come with postcodes (nearly); other fish depends on the day.

Not everyone is as happy as I am with the dogs-in-restaurants scene allowed under new laws, but Mayfield’s Kevin Byrne has come up with a solution. Their yellow bird room (the birds are on all the wallpaper just in case you thought this was a complete menagerie) is to become a “brunch with your k9” area. And they will have a private dinner area downstairs for those who want to dine al doggo. With the corkage-free BYOB policy still in place for 2018 there’s definitely a boozehound joke to be cracked on arrival.

So here I am, clutching my Happy Pear cookbook and crying into my dhal
7