Review: Dún Laoghaire has been a desert for diners – until now

We find a real feast in south county Dublin 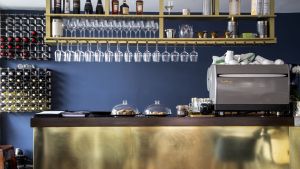 Why is Dún Laoghaire so desolate, my friend wonders as we head down George’s Street on a late summer’s evening. Swimmers are bobbing in the waves at high tide at Seapoint. There’s a sky and seascape out there to gladden the heart. Yet this strip has the feel of the coastal towns of Kent where I spent my student days. Fun is happening elsewhere. We’re stirring the Complan and brushing Digestive crumbs off the antimacassars.

But then we step into a bubble of un-Dún-Laoghaire. Feast, a smart navy-painted building on the corner of George’s Street Lower and Existential Despair Drive (okay I made that second one up, but it fits). It’s been open just under four months and it’s been a rocky start. A distress flare popped into my Twitter feed recently. “We need critics!” it said with a photograph of a plate of food and a hint of desperation. “Be careful what you wish for my pretties,” I whispered squinting at the screen and stroking the silken haunch of a white cat with a gnarly bejewelled hand.

Feast is a small room with bare black tables and sparkling glassware. The elegant chairs are velvet bucket seats that are a welcome hug as opposed to a punishment naughty stool. They’ve put a velvet swag on the window to help separate you from the 46A bus as it lumbers up to the traffic lights outside. The lighting is a warm low-slung array of bare filament bulbs.

Restaurants don’t need critics. Diners do. If you build it they will come but not, it seems, in Dún Laoghaire. “People want sandwiches,” our waiter tells us at the end of the night. So their lunch offering has already been shut down and replaced with a weekend brunch. They don’t want to start making sandwiches. And they shouldn’t.

Because a kitchen that can team fluffy white crabmeat with pickled and salt-roasted beets as beautifully as this does deserves every diner it gets. There’s a €27 three-course menu every night. The crab dish is on the a la carte. It’s paper-thin disks of sweetly pickled beet, some curled into cones with apple puree and a horseradish cream dotted into them. A lot of squeezy bottle action has gone into creating this plate. There are clumps of what look like smoked salmon but are in fact luscious petals of salt-roasted golden beet. There’s crunch from crisped shards of brown bread. We kicked off with slices of a great springy house rye with a roasted pepper dip laced with smoked paprika and topped with crumbly feta.

My friend has done for the set menu and her starter of chicken karaage (Japanese deep-fried chicken) is a salty treat, tiny drumsticks of meat fried on the bone with a back note of green chilli (I’m guessing) and spice. They come with white disks of pickled cucumber, which taste and feel more like a daikon, and a carrot ketchup on which she’s less than keen, but I love.

Mains are generous to the point of belt-straining. There’s a pork belly that’s done the great trick of crisping top and bottom while keeping the thready insides meltingly soft. “I don’t like turnip, but I like this,” Ashe says. The chunks have been roasted with wasabi, but just a touch to bring out their sweetness. Quills of cavalo nero have been crisped to glassiness in the oven and then finished with a walnut vinaigrette.

I have the brill, two fillets of it balanced on top of a plate of shredded courgette fried with fiery nduja, the spreadable Italian sausage. My only complaint? Too much creamy sauce swamping the basil and lime pesto somewhere in its soupy depths.

We share a dessert, a light sweet bowl that looks solid until you dip a spoon into it and find a creamy white chocolate sauce thick enough to hold a topping of blackberries, pistachios and a chocolate crumb. “It’s like dessert muesli,” Ashe whispers. And it is, in a good way.

My inner villain is thwarted. I am here to praise, not bury. Feast is a find in a food desert. It’s a great neighbourhood restaurant, despite the lure of a panini-lined route to an easier life. Feast is a shot in the arm to a place which risks being taken over with soulless chains and charity shops. So go ye burghers of south Dublin and keep the lights burning in this lovely hopeful little place. If it’s a sandwich bar on my next visit you’ll be sorry.

Dinner for two with sparkling water and a shared dessert came to €78.35

Verdict: 8/10 The old doll’s got herself a new gem

Buttered leeks, salmon and dill with orzo: a healthy dish bursting with flavour
9