Review: A Dublin hotel restaurant that bucks the ‘it’ll do’ trend

This restaurant has style, ambition and lorry-loads of flavour 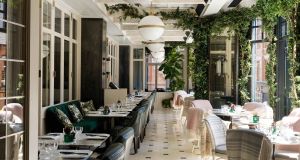 There’s a sameness about bad hotel restaurants. They’re filled with diners who are too tired or unadventurous to venture out, staffed by people who are less than pushed about dazzling anyone. The tone is one big shoulder shrug of “it’ll do”. It may be the breakfast effect. A few hours after downing your dessert fork, you might be fishing marmalade out of a jar at the same table. Hotel dining rooms can be places where ambition goes cold and more than a bit rubbery around the edges.

All that baggage is trundling with me to the Westbury on a Friday night to try Wilde restaurant. I can resist everything but the temptation to make assumptions. The Westbury is a hemmed-in building. It doesn’t have the grand vistas of Dublin’s other posh hotels, tucked as it is behind side streets with coach parking out the back. So the hotel turns its back on the city (and the century – the theme here is the 1930s) and tries instead to create clubby spaces such as Wilde.

1 Murdered and mutilated: Keane Mulready-Woods and the teenagers of gangland
2 Cork student fatally stabbed in the neck at house party named
3 Patrick Freyne: The mystery of Dermot Bannon and his many surrogate wives
4 Thousands of teachers to strike on February 4th
5 Who was murdered teenager Keane Mulready-Woods?
6 Two seriously wounded in north Dublin gun attack
7 ‘Our dream home came on the market... then a nightmare followed’
8 Irish people like nothing more than being bribed with their own money
9 A Fine Gael-Fianna Fáil grand coalition could be what the country needs
10 Leaving Cert marks are altered as part of ‘unwritten policy’, claim examiners
11 Proper cycling infrastructure ‘easiest way to reduce public transport overcrowding’
12 Miriam Lord: Micheál Martin barrelled into a hair and beauty salon. No shame
13 Permanent bathing ban is expected for south Dublin beach
14 Family of murdered teenager were sent video purporting to show killing
15 Drogheda people ‘have reached threshold’ over Mulready-Woods killing
16 Election 2020: All you need to know about the upcoming general election
17 Election 2020: FG and FF promise tax cuts and increases in public spending
18 Life in Brexit Britain: The message is clear – fit in, or get out
19 Tiny in the city, cosy in Blackrock: two to view this weekend
20 We have already commemorated the RIC - 10 years ago
21 James Ryan returns to the Leinster fold for Benetton clash
22 Election candidates who use anti-immigrant rhetoric should be disciplined, council says
23 Ministers ditch Davos for electorate’s doorsteps
24 Revealed: The fight to stop Samuel Beckett winning the Nobel prize
25 James Lowe relishing the work, rest and play of his Irish rugby adventure
26 Drogheda feud timeline: main events so far
27 Meath school set to drop controversial iPad-only policy
28 Saracens facing relegation if they break salary cap again this season
29 Killers may have photographed and videoed Drogheda boy’s body parts
30 Social Democrats: implementing Sláintecare health plan a ‘red line’ for coalition
31 Irish judges have every right to back protests in Poland
32 Climate apathy in Northern Ireland could impact on the Republic
33 Johann van Graan makes two changes for Munster’s last stand
34 I’ve long given up trying to be cool and aloof. Now I’m an expert at small talk
35 Hogan warns Britain on US trade deal as EU set to impose tariffs
36 Harry Maguire named new Manchester United captain
37 Man found with 230 buckets of Daz goes on trial
38 Homelessness is caused by bad policies, not bad personal choices
39 How common are real personality disorders?
40 Homeless man injured in Dublin canal clean-up was originally from Eritrea
Real news has value SUBSCRIBE