The Ivy: Go for the people watching, not for the food

Review: Nothing on the plate at this big name opening will distract you too much 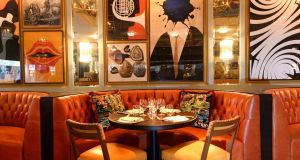 Looking out the window of The Ivy on Dawson Street you’d wonder if a Little Londoning of Dublin is happening. To the right there’s a Carluccio’s, just up from it a Marco Pierre White’s. A Wetherspoons would complete that barnacle on the hull of an ocean liner feeling – Dublin as the rummage stall for once glittery ideas from the big smoke.

The original Ivy was opened in London just over a century ago by an Italian entrepreneur. It became famous for its theatre clientele, the beautiful and the damned in their gossipy element. It went through many hands, a succession of golden ages and has sprouted into the Ivy Collection, a chain of more than 30 brasseries and cafes, most of them in London and the southeast of England. Leeds and Manchester will be Ivy-ed this year. The Ivy Dublin is the first branch outside Britain.

1 Leaving Cert: 6,500 students awarded lower grade due to code errors
2 North: 424 new cases of coronavirus in highest rate since start of pandemic
3 US presidential debate: who won, was it any good, were there any surprises?
4 Joe Biden is dodging the culture war to focus on class – and he’s right
5 Dublin needs ‘significant improvement’ in Covid case numbers, Oireachtas committee hears
6 Google tells workers to return to country where they are employed
7 Pierce Brosnan’s Malibu mansion on the market for $100 million
8 Bill Gates: A three-part plan to eliminate Covid-19
9 ‘We’ve a world that works at odd times – then I came to Ireland and everything closed at 6pm’
10 CPE superbug being detected at record levels, says HSE
11 Supreme Court sends Denham report on Seamus Woulfe to Judicial Council
12 Covid-19: Czech Republic to declare state of emergency as Dutch cases reach new record daily high
13 Gordon D’Arcy: If South Africa moves up north, it could all go south
14 The far right rises: Its growth as a political force in Ireland
15 Brexit: UK to pilot second Bill overriding withdrawal agreement
16 US election: Joe Biden and Donald Trump clash in chaotic presidential debate
17 Miriam Lord: Another dog’s dinner as D’Arcy jumps on the gravy train
18 Work from home in a picture perfect Wicklow country garden for €1.35m
19 New Octavia set to further cement Ireland’s enduring love affair with Skoda
20 The Devlin hotel operator sues insurer over Covid losses claim
21 Tell Me About It: ‘Why am I the one always left alone?’
22 Divisions ‘risk eroding public trust’ in Covid-19 struggle
23 Subway bread too sweet for the Irish tax authorities
24 Benefacts facing closure due to funding doubts
25 How to be happy in a time of uncertainty
26 Statins: Evidence for benefits beyond lowering cholesterol
27 Scale of errors in Leaving Cert results rocks confidence in integrity of system
28 H is for hero: the origin story of Jack Reacher, a billion-dollar brand
29 Michael McDowell: There needs to be greater oversight of the Covid-19 response
30 CRH finance chief announces surprise exit
31 ‘Insane’ gathering of hundreds of students in Galway condemned
32 Leslie Buckley retires from Digicel board
33 Government policy on affordable housing is ‘mañana mañana’ – McDonald
34 Recurring Covid restrictions will kill off many viable businesses
35 Matt Doherty ‘pleasantly surprised’ by Jose Mourinho’s sense of humour
36 Meghan Markle’s flight is nothing new: it’s history repeating itself
37 Prepare for six to nine months of Covid-19 restraints, warn health officials
38 Why I made a new Irish Tree Alphabet
39 Kathy Sheridan: It’s okay to be shocked about Trump’s taxes
40 Olivia O’Leary: If you move to Carlow, there are things you’ll have to get used to
Real news has value SUBSCRIBE