Has a Dublin neighbourhood eaten itself and is now entirely made of parody and artisan cheese? No, this little restaurant provides generosity and style in intriguing vegan meals 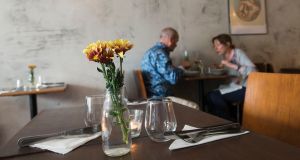 Sova Food Vegan Butcher: this is not Vegan Butcher is not a joke, it’s an intriguing new idea. Photograph: Dave Meehan

It read like a joke on Twitter. Someone has opened a vegan butcher’s in Dublin 8. The neighbourhood has eaten itself and is now entirely made of parody and artisan cheese. But the Vegan Butcher is not a joke, it’s a small restaurant on Pleasants Street where I’m bringing three other meat eaters to try out what looks like an intriguing new idea.

Barto Sova came to live in Ireland from Poland 13 years ago. He was a long-time vegetarian and became a vegan three years ago. In 2013 he started running vegan pop-ups and a market stall. That evolved into a month-long pop up in Rathmines. Then last month he opened Sova Food Vegan Butcher in a former shop on Pleasants Street.

1 Coronavirus: Warning against blame game as 46 more cases are confirmed
2 Why are there so many angry dads?
3 ‘I’m pretty sure that if I had been somewhere else they would have just let me die’
4 John Hume obituary: Nationalist leader who championed ‘agreed Ireland’
5 ASTI seeks agreement on pay as State plans to hire 1,000 teachers
6 Two people die after car plunges off road and overturns in river
7 John Hume, architect of peace process, dies aged 83
8 Maureen Dowd: The US president and the damage done
9 DUP’s Brexit ads: Who bankrolled the secretive £435,000 campaign?
10 Portuguese police disperse groups of young Irish holidaymakers
11 Nine arrested following ‘shocking’ antisocial behaviour in Kilkee
12 Netflix: 10 of the best new shows and films to watch in August
13 Nuns hold marathon prayer relay for Covid-19 frontline
14 Owner of Dundrum Town Centre to sell prized assets
15 Is that concealer you’re wearing, Mr President? The rise of men’s makeup
16 24 hours in Bundoran: ‘The town is mental. No one expected it to be so busy’
17 Una Mullally: Dublin has chance to be reborn amid Covid-19
18 Optimism fades for pubs under next lockdown lifting phase
19 John Hume: The mesmerising persuader the public rarely got to see
20 ‘Huge increase’ in falls among older people following lockdown
21 John Hume funeral Mass to take place in Derry on Wednesday morning
22 Phased reopening in German schools as classes judged unlikely Covid-19 hotspots
23 On your bike: 12 reasons to get cycling
24 Concern as OPW rejects responsibility for ancient church in Dublin
25 James Ryan injury could open the door for Ryan Baird
26 Man (25) appears in court charged with murder in Co Kildare
27 Five cases of Covid-19 confirmed at food processing factory in Co Offaly
28 Can a first-time buyer get relief on a buy-to-let home?
29 John Hume drove US foreign policy on the North for nearly three decades
30 John Hume created a light of hope in difficult times, says President
31 Róisín Ingle: I’m menstruating as I write this. And I’m mad as all bloody hell
32 Towns and villages to get €2.8m for ‘cycle cafes’ and outdoor cinemas
33 ‘I do the work and he takes the bows’: The women who use fake male assistants
34 Ken Early: Frank Lampard’s problems start at number one
35 Man who drowned in River Lee had jumped in to help friend
36 Not for the birds: Keep your blueberries for these delicious oat slices
37 Tampax’s TV ad has been banned. Get a grip, Ireland
38 Man ‘could have killed himself’ if garda did not stop him blowing up ATM
39 No motor tax refunds for vehicles off road during lockdown
40 ‘Seven years it took me’: Limerick man celebrates €500,000 EuroMillions win
Real news has value SUBSCRIBE