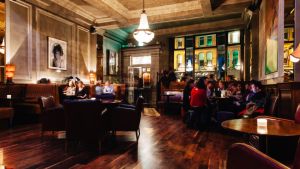 There’s a new animal in Dublin’s dining jungle: Söder and Ko is a gastroclub. Remember the food you used to get in nightclubs? Obligatory chicken and chips served to secure a late-night booze licence. At a certain stage of the night, a hatch opened and the food was slapped out. Queuing with a crumpled raffle ticket in your hand was an admission you had failed to score. Your “meal” was failure congealing in a cardboard carton.

So the only way is up. Söder and Ko is on South Great George’s St. It used to be the Dragon Bar and was bought by the businessmen behind Setanta Sports along with the George, Howl at the Moon and Cafe en Seine.

Tootling around the internet I came across a recruitment ad for wait staff for €9 an hour plus tips. Among the skills they required was “the ability to up-sell drinks and food items”.

The “would sir like a side with that?” or “still or sparkling?” school of service brings a more serious return on a major investment like this one. But so? Upselling isn’t exclusive to here. It’s how the restaurant world rolls, especially now some diners are loosening their wallet straps again.

There’s a Scandi-Asian theme to things, according to the website. Söder is Swedish for south. And Ko? Short for Korean maybe or knock out.

But I’m jiggered if I can spot any Scandinavian influences in the food or the decor. There’s nothing pared back about the look. Every cent of the €750,000 refurbishment this vast building soaked up is on display with a huge double height front part that leads into the rear of the building that stretches all the way to the Red Cow roundabout.

There’s a mirror the size of a pool table. At one point a giant Caroline Morahan seems to be looming in the door at us, but it’s just the side of a bus reflected in more tilted mirrors inside.

Against all this bigness this is a small dish joint. The chef (or “culinary director”) is Kwanghi Chan, who has arrived here from the Michelin-starred Cliffhouse Hotel restaurant in Ardmore, Co Waterford.

I love the menu. It’s a simple three dish deal with a side for €25 and they all sound great. We’re here to have a family dinner with some chicken wing-loving children and the grown-ups who are hoping to be knocked out by small plates of delicious punchy flavours.

But we have to wait a while for that button to be pressed. My raw scallop is a saucer-sized beautiful plate, meat buried under pretty but watery shavings of raw fennel. The scallop is presented in finger-width wedges rather than the finely sheared petals or small nubbly chunks. It’s served in a sweet clear lime dressing that tastes more of sugar than citrus, making a dish that’s fine rather than sublime.

There’s another dish that looks gorgeous, a chunk of skin-crisped salmon with daikon cut into perfect coin rollsize wedges and topped with a silky butternut squash puree. Sadly the fish is overcooked so it’s lost its lusciousness.

Then the pleasure button is pressed with tempura squid, feathery battered crunchy tentacles squeezed with lime and then dipped in fantastic lemongrass and basil mayonnaise. They’re as addictively compulsive as freshly popped popcorn.

A similar trick has been done with some tempura-ed broccoli, still bright spanking green inside a light crisp coat. There are great pot-stickers, crispy chicken and spring onion dim sum with a note-perfect dipping sauce.

The other resounding hit is a plate of charred fillet steak, two luscious medallions of meat with wodges of brown sticky rice between them. Each mound of sweet rice is topped with a delicious nipple of egg yolk. At €9 it’s a steal.

From these great heights we’re grounded again with the steamed buns, one kimchi, one duck, so soft that the sweet dough doesn’t so much stick to your teeth as meld to your molars making it a dish that stays with you in the wrong way. Then there’s the Chinese five-spice flavouring heavily laced through the duck that delivers takeaway burps several hours later.

And the wings? They’re fine, but coated surprisingly in a fried chicken style batter, more fast food than street food.

There’s a carton of the brilliantly-named Nobó Irish dairy-free chocolate and toasted almond ice cream to finish. And the whole meal is served by great staff who show all the signs of being recruited for their people skills rather than their upselling ones.

So an enjoyable roller coaster of a meal. Some great food moments dipping to ordinary ones, which is more than you can say for most bars.

Dinner for five with a beer and a glass of wine came to €79.