Feast: A tasty move from Dún Laoghaire to central Dublin

Review: Promising food on Golden Lane might make this spot a keeper 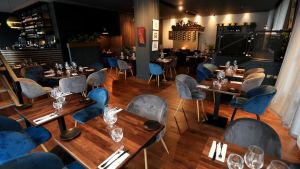 The friend has a “so what are we doing here” arch to her eyebrow when I sit down in Feast in Dublin’s Golden Lane. When I sent the text she had a quick look at the menu online and is “just not sure”. Then there’s the place. Sat next to a Radisson hotel in the ground floor of an apartment block, the room has had multiple personalities. Slabs of Argentinian beef sent out meaty wafts when it was a steakhouse. Then it was a Thai place. The one constant during its different incarnations was that it had the personality of a generic hotel restaurant, even though it wasn’t in a hotel. For years it has been the door I passed on the way to somewhere else. Now it is Feast.

That’s enough reason to cross the threshold and hopefully enough to break the jinx of a restaurant location that never seemed to catch on. Feast was set up by friends in Dún Laoghaire in 2016. It was a lively and ambitious addition to the food scene in the heartland of that well-heeled but vaguely dismal part of south Dublin.

They closed the doors in the summer. I got the news by disappointed text from a friend who loved it. But they haven’t gone away. Instead they’ve come to the city centre in search of diners. Feast 2.0 is bigger, a high-ceilinged modern room with acres of glass swathed in filmy curtains. They’ve painted it battleship grey to take the starkness off it and added lots of warm wood and comfortable velvet chairs.

It doesn’t have the cosy neighbourhood feel of old Feast, and the menu has a lot of words. Front of house, Sergey Letsko tells us that some Canadian customers simply didn’t understand the food. It’s been a point of discussion between him and head chef Laszlo Kamondi, who has worked in the kitchens Restaurant Patrick Guilbaud and Dax, according to their press release. Kamondi is joined in Feast’s new kitchen by sous chef Lisa Turner. My friend is with the Canadians. She’s questioning the point of teaming chorizo-roasted carrots with a carrot sauce. Is it just trying too hard, like the wedding guest who goes a fascinator too far and makes a bags of it?

The bread makes it all better. It’s good bread but more importantly it’s served with almogrote an orange puddle of dip, a traditional Canary Islands paste made with peppers, olive oil, paprika and manchego cheese. Instead of the salty sheep’s cheese there they make it here with parmesan and it’s lick the plate delicious. There’s an excellent black olive tapenade beside it made with good purply juicy olives not the leathery sad ones dyed liquorice black.

The carrots with carrot sauce are good too but it’s the scallops sitting on top of them that get us on track. They’re expertly cooked, plump, juicy and the perfect mix of sweetness and sea flavour. It’s a beautiful plate. My corn broth is served in a stone-coloured bowl and plate, smooth inside with a gritty as fine-grade sandpaper glaze on the outside. The shallow bowl has a slab of smoked eel in the centre drowned in a delightful broth, juicy sweetcorn kernels that have been charred before being added to the party. It’s gorgeous but for chunks of “corn sponge” which are Mr Kipling sweet and shouldn’t be sharing a postal code with this broth, much less a bowl. They’re solid enough to be separated from the rest of the dish and decommissioned as an ingredient but they should never have been there in the first place.

Aubergine ash brings the crossness back momentarily. “Now what’s the point?” It’s the final flourish on a lamb shoulder main. But the meat is “stunning” enough to convince her “chef knows what he’s doing” aubergine ash or no aubergine ash. The lamb has been slow cooked to a barely solid thready softness with layers of flavour deepening down into almost mutton. There are potato cubes diced and then crisped with cubes of Reblochon, the French cheese which comes with the best back story. Its name is from the French verb reblocher meaning to pinch a cow’s udder again. It was originally made with thicker milk from a second milking after the tax inspector finished measuring the amount of milk taken in the first milking.

I have two juicy wedges of duck breast with parsnips, roasted in duck fat and served on a creamy parsnip puree. It’s excellent, and as part of a €34 three-course deal (€28 plus €6 extra for the duck), good value in this pricey part of town.

We share a baked-carrot cheese cake, which tastes like carrot cake mixture in cheese cake form, not in a bad way but possibly erring on the too many things going on side of the plate. It comes with an excellent fruity coffee topped with a creamy crema from Dublin roasters, Two Spots.

Trying too hard is definitely the better angle than not trying hard enough, which sums up the main offering at this price in these parts. I have a hopeful feeling about Feast. Once they figure out the tone and let the cooking shine the three-course deal will be enjoyable eating without the eye watering bill.

Dinner for two with three glasses of wine, two sides, shared dessert and coffee comes to €109.20.