An authentic taste of France in south Dublin

It’s a bake off this week between Le Daroles in Auch, France and a bistro in Dublin 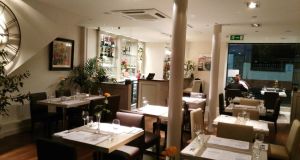 Le Pastis in Blackrock, Co Dublin: My meal couldn’t get more Gallic if it was served by Gerard Depardieu in a cloud of blue Gauloise smoke humming Edith Piaf

There’s a dog doing what dogs do in the corner of an old photograph of the Gascony town of Auch. The striking thing about the picture, hanging in the foyer of the Hotel de France, is that outside things are pretty much the same since it was taken maybe a century ago. The hotel is still open for business. Beside it stands the town hall and across the road sits the cafe Le Daroles. The cafe is still there. It’s still called Le Daroles.

French restaurant culture, which set standards around the world, might have relinquished her crown to the new kids of Spanish and Scandinavian cooking. But those roots go deep. We are sitting outside Le Daroles doggedly insisting on staying under the heavy grey clouds. A hot spell has broken with a thunderclap earlier. The waiter thinks it’s going to rain. We’ll risk it.

1 Ireland’s favourite takeaway revealed
2 Irish Times poll: Large majority want change of government
3 Rob Delaney: ‘As my career took off, my son got sick...then he died’
4 Who are Ireland’s 17 billionaires?
5 52 places to go in 2020: Here’s where the New York Times says you should visit
6 Is Ireland moving left or simply moving on?
7 Are there annual limits on inheritances or gifts to a child?
8 My father in a nursing home wants to gift me his house
9 Miriam Lord: Greens take to the beach as signs emerge of a rising tide
10 Taoiseach claims Sinn Féin not ‘a normal political party’
11 Scientist says methane from farming should be treated differently to CO2
12 Man who killed Jastine Valdez shrugged before being shot by gardaí, inquest told
13 Eating out in Dublin – the homeless way
14 FG and FF back transition payment for persons retiring before to right to State pension
15 M50 tolls payment case against Keane Mulready-Woods withdrawn
16 Some 45,000 taken off waiting lists last year without seeing medical specialist
17 Trump impeachment trial: First full day descends into acrimony
18 Boeing says 737 Max won’t be cleared to fly until mid-2020
19 Countries that fail to attract immigrants will lose out – Microsoft chief
20 Gardaí suspect botched murder attempt was bid to avenge Mulready-Woods death
21 Kathy Sheridan: Do election debates matter anymore?
22 Fintan O'Toole: Safety-first politics has had its day
23 Pat Leahy: Fine Gael needs to stage a comeback to win election
24 More than 23,000 people apply to be Great Blasket caretakers
25 Don’t like running? Here are 10 other paths to fitness
26 The Irish Times view on the Trump impeachment: over before it begins
27 Fintan O’Toole: Ten big questions for incoming politicians
28 100 of the best restaurants, cafes and places to eat in Ireland 2019
29 Ross O’Carroll-Kelly: ‘While I hate lying to him, that’s my job as a parent’
30 UN report says Israel a ‘racist state’ and ‘apartheid regime’
31 The sad, secret life of Whitney Houston
32 Find out if your local TD is a landlord or owns multiple properties
33 Dublin office vacancy rate hits lowest level in 20 years
34 Out of the wasteland: the first World War and modernism
35 Schoolboy gets four-year suspended sentence for attack on delivery man
36 Patrick Stewart returns to Starfleet: ‘It’s inconceivable to me that I should retire’
37 Ruth Negga: Playing Hamlet nearly killed me
38 Seven reasons to watch Paris Hilton’s new cooking show
39 Why is Greta Thunberg so triggering for certain men?
40 Corporate tax change is inevitable, says Donohoe
Real news has value SUBSCRIBE