Róisín Ingle: It was always Borza’s chips on Christmas Eve 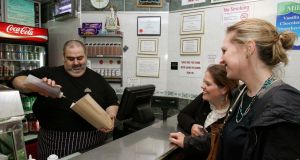 On Christmas Eve every year, I head over to my sister Rachael’s house. We eat lobster bisque risotto and drink champagne and play cards late into the night. We gamble with coins we call “shrapnel” and when someone messes up in the card game Nap, passed on from our English grandmother Ethel, we’ll say with disdain: “Nanny would be turning in her grave.” We play and chat until we hear the faintest sound of sleigh bells and realise the lateness of the hour and we panic a bit and drain our glasses and get out of Santa’s way.

I’ve performed this Christmas Eve ritual at various ages and stages of my adult life: while mourning a broken relationship, mixing salty tears with the extra medicinal helpings of champagne. While pregnant, lying on my sister’s couch, minus the champagne, being waited on hand and swollen ankles by her husband, Paul, milking my “with child” status for all it was worth.

I’ve done it with twin babies asleep in prams and twin toddlers threatening to topple John Rocha champagne flutes and this year I’ll do it with twin nine-year-old gourmet girls who I’m seriously worried won’t be fobbed off with spaghetti Bolognese in front of a Christmas movie while we get reacquainted with the lobster bisque risotto in the kitchen downstairs.

Champagne. Lobster. Cards. The craic. I look forward to Christmas Eve perhaps even more than Christmas Day. Around November I’ll ask Rach, “Have you got the bisque?” and she’ll tell me where exactly she sourced the crucial ingredient this year. Sometimes it’s M&S. Once I picked it up for her on a camping holiday in France. We had a posh Selfridges of London version one year. And a cut-price German supermarket jar another time. Throw enough Gruyère cheese on the top of the risotto, add a few prawns, and it always works out. The dish is baked in the oven, so no annoying stirring to interrupt your evening. It’s a Delia Smith recipe. And everyone knows Delia will never do you wrong.

It’s far from lobster bisque risotto we were reared

I don’t know where this lobster bisque risotto tradition came from. I think Rach might have got notions one year from living in France. This Christmas Eve extravaganza used to be just her and Paul until I decided to get in on the act and then my mother was included and now it’s a proper tradition. The unwritten rule is that at some point one of us has to proclaim with a mouth full of lobster and champagne: “It’s far from lobster bisque risotto we were reared.”

It really is. Growing up, our family Christmas Eve tradition was to have a feast of chips. The best chips in Dublin, mind you. Borza’s chips. Steaming, brown paper bags full of them. Onion rings. Sausages in batter. Smoked cod. Fresh cod. Maybe a spice burger or three.

Borza’s was on Sandymount Green. Three doors down from our house. On Christmas Eve, when Ryan’s and Reilly’s, the two village pubs, kicked out the last of the crowds, the stragglers would head into the chipper and wander home to greet Christmas morning with warm, vinegary bags of chips. But there was always loads of leftovers in the chip shop. And I don’t know how it started but Mama and Papa Borza must have decided that us Ingles, all eight of us and our mother Ann, were the worthy recipients of the chips and various other deep fried delights that did not get bought by the punters on Christmas Eve.

It was usually Bruno, their eldest son, who eventually took over the chipper with his wife Angela, who came around with the chips. I can see him now, standing smiling in our kitchen, arms around the big brown paper bag of steaming goodness, sometimes cradling a bottle of homemade Italian wine under the other arm. He’d not stay long knowing that when he was gone we’d fall on those leftovers and the plate piled high with white bread and butter.

I told Bruno thank you, thank you for everything. I didn’t just mean the chips

It was my mother who told me that Borza’s had closed. Though I hadn’t seen him for a good while, I had to ring Bruno to see if it was true. There was no reply. I kept ringing. Eventually Bruno picked up. He said he knew if he didn’t answer I’d never stop calling. No need to go into the why of it closing, everything changes, as I’m always telling my kids. Life is all openings and closings, arrivings and leavings. Talking to him felt like one of those leavetakings. It seemed stupid but I told Bruno thank you, thank you for everything. I didn’t just mean the chips and I think he knew because there was a loaded sort of silence before we said goodbye.

The Borzas did a kind and charitable thing for our family all those Christmas Eves past. An unusual thing in some ways but not all that unusual when you think about good neighbours all over the country who have gestures and rituals they perform quietly for less well-off people in their communities.

The memory of this one lingers every Christmas Eve. I’ll toast the Borza family over the risotto tonight.