Bocuse, one of the masters of French gastronomy, has died at the age of 91. Thornton reminisces about working with him and McMahon charts his influence on global cuisine 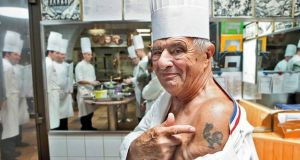 Kevin Thornton: I was very saddened to hear of the passing of Paul Bocuse this week and the news has stirred many warm and vivid memories of my time spent in his kitchen.

In the summer of 1987, I was fortunate to land a two-month paid position at Restaurant Paul Bocuse in Lyon, France.

I had already enjoyed many years of cooking in various restaurants throughout Europe and also in Canada. However, cooking in Paul Bocuse’s kitchen proved to be the most inspirational and influential training I was ever to experience. His encouragement of me as a chef hugely strengthened my confidence and self-belief.

His kitchen was run with mesmerizing precision and the efficiency of the operation was military-like. There was an ordered way of doing things and no deviation was tolerated. Coppers hung gleaming and proud over the huge stove as they have done in every kitchen I have ran since then.

I have no doubt that my appetite for precision and attention to detail was indulged so much at Restaurant Paul Bocuse that it copperfastened my approach to every aspect of cooking from then on.

My first few days there, I was ordered to clean the many fridges – this was what every new chef to the kitchen was tasked with. Within a short while I was promoted to the pastry section, then to the fish section and finally to the most coveted corner of the kitchen – sauce. I knew I had passed the test of discipline and showed my hunger to achieve.

“Superb, petit Irlandais”, he would say when I plated something to his satisfaction, and for one who did not give praise often, these were big words.

When he wasn’t away in Japan, or at another of his restaurants, he spent a lot of time in the kitchen in Lyon. He was the executive chef. He would greet each member of the brigade on his arrival in the kitchen, and while he was very strict he was also very fair.

He had a dog called Coco that he adored and who often accompanied him (though not into the kitchen).

I have a few standout memories. Daily inspections of staff uniforms took place, and long hair was not permitted under any circumstances. I had a little ponytail that I kept hidden under my chef’s jacket. One day while bending to take a plate from the oven, the head chef noticed the ponytail.

All hell broke loose. “It was like sacrilege – what would the papers say if they found out a chef at Restaurant Paul Bocuse had long hair. What would Monsieur Paul say!” he exclaimed (except in French).

I said it was a religious thing – part of my Buddhism – anything to fend of the summons to cut it off. But nothing worked. If I wanted to stay, the ponytail had to go. I had a decision to make and, for me, it was a very difficult one. I decided to sleep on it.

The next morning I was late leaving my little bedsit and I rushed to work bringing my nail scissors with me. I still hadn’t decided if I would do what I had been told to do.

When I got to the door of the kitchen, the head chef was waiting for me, arms folded, pointing at my head to turn around. I took out the scissors and cut off the ponytail in front of him and handed it to him. That was a big statement of respect for me to make, and one that I never regretted.

Another day there was an English speaking guest in the restaurant that none of the staff could understand. I was summoned by Paul Bocuse – “Viens ici, petit Irlandais”.

I duly translated the praise from the guests and he was very happy with their remarks. I went back to my work. The next evening, I was invited to eat at the chef’s table with Monsieur Paul and the rest of the senior team and that again was a privilege as it didn’t happen often.

This photo was taken on my final day at Restaurant Paul Bocuse. He told me I had “mains speciales” and he smiled and posed for the camera.

I met him again a few years later, when I represented Ireland at the Bocuse d’Or competition, and he remembered me. A few years after that, I was representing Ireland at a Panel of Chefs event in South Africa which he attended also, though I was unaware he noticed me at all.

Back at my hotel that night I received a note under my door from one of his team inviting me to attend a breakfast with him the following morning.

For me, Paul Bocuse was my Escoffier, and I feel privileged to have spent time in his kitchen. May he rest in peace.

JP McMahon: The passing of Paul Bocuse marks a decisive moment in the history of contemporary cooking. In many ways, Bocuse has cast his shadow over much of our culinary heritage, influencing chefs such as Thomas Keller, Daniel Boulud and Kevin Thornton.

Though famous for maintaining his three Michelin stars in his restaurant in Lyon, I think his legacy resides more in his cooking school and the competition, Bocuse D’or, which was established in 1987.

Only one so supremely confident in his ability to influence would name an international competition after himself. Some 31 years in the running, encompassing 24 countries, it sets the bar for what can be achieved in cooking through relentless hard work. All other cooking competitions are mere mimicry.

The chef-patron of Geranium, Rasmus Kofoed, took home the gold in 2011 (and bronze and silver two other years) and the trophy stands proudly in his own three-star Nordic restaurant in Copenhagen.

Spending time there two years ago, I could see how proud he was to be part of the legacy of Bocuse. In recent years, new Nordic cuisine has perhaps eclipsed the nouvelle cuisine that began way back with Bocuse.

But every dog has his day, and I get a whiff of the return of certain aspects of French cooking. The passing of Bocuse will no doubt codify his legacy and lead to a return to many of the techniques he championed.

For many of us, the contemporary chef is a tattooed hipster looking for himself in the natural world. Bocuse was proud of his own tattoo. Perhaps my favourite photo is of him pulling down his chef top from his shoulder to reveal his tattoo.

The Norwegian restaurant Maaemo performed a wonderful tribute on Instagram with all their chefs line up in this pose.

He was proud also of his relationship with the land and many a forager entered his kitchen with wonderful morels or chanterelles. With the passing of Bocuse (and Antonio Carluccio), we need to remember that foraging was once a necessity for cooking as opposed to a trend for angel haired hipsters.

The balance that Bocuse brought to cooking was that food must encapsulate tradition as well as innovation. This is perhaps the most important aspect of his legacy.

I recall watching a video of him cooking a chicken baked in a salt crust. The programme was from 1976 (two years before I was born), but the technique could not be more ancient – and of the moment.

Salt baking is seen on many menus now all over country, particularly in the case of salt baked beetroot. But as Bocuse observes in his demonstration, the technique of burying something in salt and cooking it over fire goes back to the ancient Chinese.

Burying a chicken in salt and baking it is a beautiful alternative to simply roasting it. Stuff the chicken with herbs and garlic and cover with 5kg of coarse sea salt. Bake for around an hour. Crack open the salt and enjoy. It will be as moist as hell.

I never got to go to restaurant Paul Bocuse (L’Auberge du Pont de Collonges) but this does not bother me so much. Having read my way to where I am, I will continue to read Bocuse, in his books, watch his videos and follow the many countless imitators he has spawned all over the globe.

I wonder will the new Noma, set to open next month, make homage to his passing, unconsciously or otherwise. Each time we cook a fish or make a sauce, Bocuse is looking over our shoulder, making sure the fat, salt and acidic elements are all in balance.

History is cyclical, as we know, and things are never black or white. Bocuse’s legacy will be found in the most obvious and least likely of places, now and in the future.