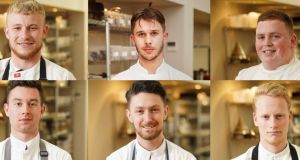 The six were selected after a cook-out at Dublin Cookery School in Blackrock on Monday during which they were asked to create a dish using a whole turbot, accompanied by pommes mousseline (for which no recipe was supplied), beurre blanc made to a specific recipe, and their choice of vegetable garnish.

The semi-finalists were assessed on their skills by guest judge Tom Brown of Cornerstone restaurant in London, along with Irish chefs Kevin Thornton, Wade Murphy and Gareth Mullins.

The two-hour kitchen skills test was overseen by chef Domini Kemp and each semi-finalist was tasked with presenting two plates of their dish. They were assessed on their workspace practice and execution; the taste of their finished dish and side dish, and their presentation skills.

Gareth Mullins, executive head chef at The Marker hotel in Dublin 2 and a member of the judging panel, said: “The mystery basket was a real test of the young chefs’ basic skills, including their knife skills, their palate, their creativity and ability to plate. This stage of the competition was about their cooking skills, technique, seasoning and understanding of raw ingredients.”

The final six will now take part in a series of educational and networking events before competing in a final round of judging in November. Their next engagement is a workshop with Cuán Greene, an Irish chef working at Noma in Copenhagen. They will also take part in the Food on the Edge international chefs’ symposium in Galway in October.

Manuela Spinelli, Secretary General of Euro-toques Ireland said: “The six talented young chefs in this year’s Euro-Toques Young Chef of the Year 2018 have been chosen for their enthusiasm, talent and eagerness to learn and I am once again so happy to see such a high level of skill and technique coming through in this exciting competition which is designed to nurture that talent.”

The competition is sponsored by La Rousse Foods, with support from San Pellegrino.