‘If you don’t have a keep cup you don’t get a coffee’: The rise of the no-cup cafe 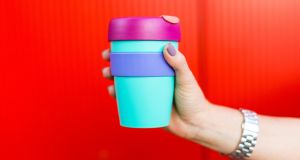 Is this the future for coffee consumers?

In 1980s Ireland, anyone who asked for a takeaway coffee was looked at like they had two heads. While single-use, plastic-based cups that could be used to drink coffee on the go were all the rage in the US and in other more exotic locations, they were not really a thing in this part of the world.

Coffee came in reusable ceramic cups and occasionally mugs and that was the end of it. Then the 1990s happened and as the boom started, people lost the run of themselves entirely and started ordering double decaf skinny mocha lattes, like they were Carrie Bradshaw.

Then it got completely out of control. Today, consumers in Ireland buy an average of four hot drinks a week and around two million plastic cups are being sold every single day. Almost none of them are recyclable and most end up in landfill.

Earlier this month, a public consultation on a range of levies on single use coffee cups was launched by Minister for Climate Action and Environment Richard Bruton. The new taxes could be rolled out on a phased basis from 2021, adding between 10 cent and 25 cent to the price of a takeaway beverage sold in a single-use cup.

Many cafes already offer discounts on hot beverages sold to customers who bring their own reusable cup. Food and drink writer Melanie May compiled a countrywide list of vendors who offer this discount, ranging from 10 cent to €1 per cup.

But what if we lived in a world where single use cups no longer existed? There are some people who are trying to make that happen and sooner rather than later.

Recently, Bread 41 on Dublin’s Pearse Street announced that on Mondays it would no longer sell takeaway coffee to people unless they had a keep cup. By the end of February, owner Eoin Cluskey says every day will be like Monday and he will no longer have any single-use cups in his shop.

“On a Monday, if you don’t have a keep cup you don’t get a coffee,” he says. “I know that sounds a bit extreme, but we are in week five and have had a great response so far.”

He says that before he introduced Keep Cup Monday, he was selling about 180 takeaway coffees on a Monday. That number fell initially to 120, but has climbed steadily since and is now back where it was.

“Unless somebody does something, nothing gets done,” he says “And that is why by the end of February we are hoping that every day will be like Mondays and you won’t be able to get a single use cup in our shop. Reusable is the only way to go.”

He says that coffee shops have to accept that they “are part of the problem and we have to be part of the solution.” He says that since he rolled out his Monday measure, a lot of people have been “a bit sceptical and asking why I doing this, what’s my angle. But this is all about the environment, there is no angle. We are very busy, so maybe I’m more able to do it than a coffee shop that is struggling, but there are plenty of coffee shops that are making plenty money and they could do it too.”

Kevin Murphy is hoping to convince more shops to do just that. In early 2018 he set up a company called 2gogup with the stated aim of “completely removing all disposable cups from the country.”

His idea is very simple. You buy a cup of coffee in one of the participating coffee shops and on top of the price you pay a €1 deposit for the cup. You can get the deposit back at any other coffee shop participating in the scheme, or use the cup you have to get a fresh cup at the regular price.

Coffee shops can buy the cups he sells for €1 each and then they can pay a small fee to be involved in the social media marketing campaign. Murphy says participating coffee shops will save around 80 per cent on the cost of cups each year through involvement in the scheme.

There are dozens of businesses already on board, including coffee shops in the National College of Art and Design and Trinity College, and across the country – including almost 20 in Clonakilty, which is aiming to be the first town in Ireland to get single-use cups off the menu entirely. The coffee sellers at Wild Lights in Dublin Zoo are on board, as are major employers including the ESB.

“I set the company up with the view to making reusable cups practical and affordable and then I was approached by a group of academics and asked to build a pilot scheme for a deposit and return scheme that could run in the universities,” he says.

He looked at what was happening elsewhere and found a similar deposit and return scheme in Germany. But the cups being used were not right for a hot tea and Americano-loving Irish market, “so we took a step back and spent four months building our own cups.”

These are thicker than the German models and can be re-used up to 1,000 times. “My goal at the start was to make it affordable, efficient and consumer friendly.”

He says the keep cup idea is great, but not practical for everyone. “Maybe two out of 10 people will diligently carry a keep cup and bring it home and wash it and then have it with them on the following day when they want a cup of coffee, but it eight out of 10 people won’t, so this is for them.”