Hey pesto, Northern Ireland is in the Pesto World Championship 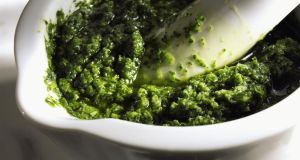 In the final of the Pesto World Championships, competitors will prepare Genoese pesto with a pestle and mortar, all using the same traditional ingredients.

Northern Irish woman Clare Rainey is just one of 25 non- Italians to qualify for the Pesto World Championship, which takes place in Genoa next week.

It is the first time a person from the island of Ireland will take part in the event, according to Magne Haugseng of Économusée, a rural crafts and tourism project. He brought the competition to Northern Ireland by organising a qualifier, which took place at the Causeway Centre last October.

The final will be held on Saturday, March 29th, when 100 competitors from around the world will prepare Genoese pesto with a pestle and mortar, all using the same traditional ingredients. The competition is run by Associazione Palatifini, a group of people with a passion for gastronomy.

Ms Rainey, from Portrush, Co Antrim, grows herbs and makes and sells her own Kookycook pesto. She had never heard of the Pesto World Championship until the qualifying competition was announced.

She said the fact that she made pesto every day might have given her an advantage.

“My pesto is made from as many Irish ingredients as possible but we had to make it from Italian ingredients that they supplied – Italian basil, Italian pine nuts, Pecorino cheese, Parmesan and olive oil – and with a pestle and mortar. And, bizarrely enough, I won,” she said.

All competitors will be supplied with an identical set of ingredients next week, but Ms Rainey said she and the other non- Italians would face a tough battle as 25 competitors are from Liguria and 50 are from the rest of Italy.

“Genoa is seen as the home of pesto – the best basil in the world is grown in Genoa,” she said.

While she likes the traditional recipe, she prefers to make pesto using as many local ingredients as possible, such as Broighter Gold rapeseed oil from Limavady, Irish Atlantic sea salt from Cork, cheese from Ballyrashane Creamery in Coleraine and herbs from McCormack Farms in Co Meath.

Competition recipe
Ingredients:
Four bunches of fresh Genoese basil
30g pine nuts
45-60g aged Parmesan cheese, grated
20-40g fiore sardo cheese (Pecorino sardo), grated
One or two garlic cloves from Vassalico in Imperia
10g coarse salt
60-80cc extra-virgin olive oil from the Italian Riviera
Preparation:
- Must be made with a marble mortar and wooden pestle. Wash the basil leaves in cold water and dry them on a tea towel but don’t rub them. Crush the garlic clove and pine nuts in the mortar until the ingredients are smooth. Add a few grains of salt and the non-pressed basil leaves, then pound the mixture using a light circular movement of the pestle against the sides. Repeat this process.
- When the basil drips bright green liquid, add the Parmesan cheese and the fiore sardo cheese. Pour in a thin layer of extra-virgin olive oil, which lightly blends the ingredients, without overdoing it. The preparation must be done as quickly as possible to avoid oxidation.