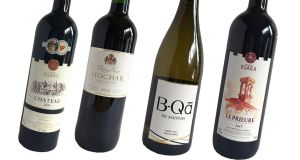 I have always been fond of Lebanese red wines, but was very pleasantly surprised at a tasting of the textured white wines a few years ago

Lebanon suffered yet another man-made disaster recently when a huge explosion in Beirut killed more than 200 people and left 300,000 homeless.We can do our bit by buying a Lebanese wine. Importer Mackenway is donating all profits from the sale of Ksara wines in Ireland until the end of this year to the Lebanese Red Cross. Retailers are making contributions too.

Most oenophiles will be familiar with Château Musar. However, it is a fairly recent addition to a long history of wine-making going back centuries to the time of the Phoenicians.

The modern industry was started by Jesuit monks who founded Château Ksara in 1857. Under the Ottoman empire, Christians were permitted to produce wine for religious purposes. It expanded under the French mandate and remained with the order until 1973, when it was sold, as the Vatican encouraged religious orders to divest themselves of commercial activities.

Then and now, Ksara is the largest wine producer in Lebanon, offering no fewer than 17 different wines, as well as Arak, an anise-flavoured spirit very popular in Lebanon.

I have always been fond of Lebanese red wines, but was very pleasantly surprised at a tasting of the textured white wines a few years ago

Recent history has been less kind, with producers having to deal with civil war, occupation and invasion throughout the 1970s, 1980s and early 1990s. Somehow Ksara, Musar and Château Kefraya (another leading producer) still managed to pick grapes and produce wine. Despite the economic problems that have beset Lebanon since, it did seem as if the wine business was flourishing, with the number of wineries expanding from 10 in 1998 to more than 50 today.

Almost 90 per cent of Lebanese wine comes from the Bekaa valley, a long, narrow, fertile, high-altitude valley. The vineyards are protected on one side from the maritime rains and on the other from the hot desert climate. The grape varieties are generally southern French with some Cabernet Sauvignon, Chardonnay, Sauvignon and Sémillon as well. However, the wines taste nothing like their French counterparts. I find they have their own set of unique, spicy, herby flavours.

I have always been fond of Lebanese red wines, but was very pleasantly surprised at a tasting of the textured white wines a few years ago, which included some made from Obaideh/Obeidi, an indigenous Lebanese variety.

Château Marsyas is one of the newer wineries, founded by an eastern Christian family with deep roots in the region; they also have a winery in Syria. Their offices in Beirut were destroyed and several members of staff seriously injured in the recent blast. Yet they still managed to complete the 2020 vintage.