Guns’n’Rosé beer: Not exactly what Axl has in mind after a gig

Beerista: Controversial ale arrives in Ireland, plus fruity beers from Wylam and To Øl 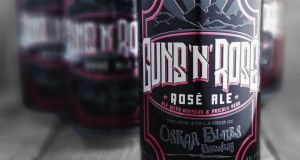 Guns’n’Rosé: the hibiscus-and-prickly-pear ale the band object to pours with a tinge of pink

Guns N’ Roses were not happy about the name of a new hibiscus-and-prickly-pear beer released in Texas last month. Described as a rosé ale, Guns’n’Rosé caused “irreparable damage” to the band’s brand, they argued, claiming that fans would confuse it with official products. The band are suing for trademark infringement against Oskar Blues Brewery, part of the Canarchy Craft Brewery Collective.

The controversy will no doubt boost sales of the beer, which recently arrived on shelves here. (I picked up one at Blackrock Cellar.) Oskar Blues, meanwhile, reportedly plans to continue to brew Guns’n’Rosé until 2020.

The beer is quite delicate in flavour, and not exactly what you’d imagine Axl, Slash and the lads necking after a gig. It pours with a tinge of pink and gets a bit of sweetness from the hibiscus. Overall it’s crisp, with a touch of tartness, light-bodied for its 6 per cent alcohol, and would work nicely as a refreshing, sunny-weather beer.

Marmelade – which means Jam in Danish – is another new beer on the shelves, this time from the To Øl brewery (the name means Two Beers), in Denmark. Described as a vanilla fruit ale, it looks great in the glass, pouring a strawberry-jam colour. There’s blackcurrant – think Ribena – and lots of vanilla, although the sweetness falls away quickly. This is tasty but quite intensely flavoured, and, at 7 per cent alcohol, I’d recommend sharing, as it comes in 500ml cans.

There’s Nothing Wrong with Dreaming, at 5.8 per cent, is an orange wit beer – which is to say a Belgian-style wheat beer, or white beer – made by Wylam Brewery, in Newcastle in England, and Deya Brewing, in Gloucestershire. Made with coriander, orange and a new hop called Sabro, it pours hazy, with a lovely frothy head and fresh, hoppy aroma. You’ll get a hint of coriander and lots of orange citrus flavour, and it finishes dry and clean.

This is my favourite of the three – and is definitely a contender for my desert island beer stash.