Another Round: Blackwater distillery has developed a Tanora gin made with tangerine peel 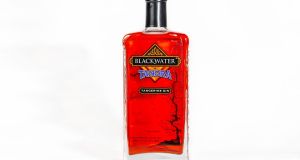 Peter Mulryan has produced a string of innovative gins, flavoured with strawberries, raspberries and even Barry’s Tea, as well as the highly successful standard Blackwater No 5 gin

Peter Mulryan is something of a rebel. He has released a string of innovative gins, flavoured with Wexford strawberries, raspberries and even Barry’s Tea, as well as the highly successful standard Blackwater No 5 gin. “Gin pays the bills, he spends it,” he says, pointing at recently installed whiskey distiller John Wilcox.

There are great plans afoot regarding whiskey in Ballyduff, Co Waterford. Mulryan and Wilcox are tearing up the rule book. “We’re doing a lot of funky stuff here,” says Mulryan. The pair are experimenting with various very old mash bills (the list of ingredients used for making whiskey) that include oats, barley, wheat and rye. He has mash bills dating back to the 1890s.

1 Storm Dennis washes abandoned ‘ghost ship’ onto rocks off Co Cork
2 Dancing with the Stars has hit Father Ted levels of farce
3 Everything you need to know about pensions but were afraid to ask
4 Forget a grand coalition – here is what the next government will most likely look like
5 Fine Gael faces internal resistance to a grand coalition with FF and Greens
6 New network of 1,322 speed cameras comes into force today
7 Man dies in apparent accidental shooting at Dublin firing range
8 Caroline Flack death: Public disquiet over media conduct grows
9 Magdalene survivor takes case to UN torture committee
10 One of Ireland’s largest law firms has no office here
11 Over 2,000 buyers bid for first affordable homes planned for south Dublin in years
12 Magdalene survivor: ‘It feels like Ireland is abusing us again’
13 Tipping Point: Eddie Jones’s rhetoric is out of place in a febrile political climate
14 ‘I’m an emotional wreck’: Dublin man fears council will seize his caravan
15 Ireland backrow of O’Mahony, Van der Flier and Stander to be retained against England
16 Ireland should beware the perils of a grand coalition
17 Irish company paid €1.2m a year by collapsed Blumenthal-linked Australian restaurant
18 Paraic O’Donnell: MS is meticulously destroying me. I am being unmade
19 Housing is at crisis point – it is time to park ideology and build
20 Coronavirus: Irish passengers trapped on cruise ship in Japan set to be evacuated
21 Storm Dennis: Thousands without power as wind warning issued
22 Una Mullally: How Repeal and marriage equality wins inspired this change election
23 Fine Gael’s Catherine Noone secures nomination to run for Seanad
24 Airport operation to block Albanians, Georgians from claiming asylum is ‘scaled back’
25 Harry Gregg: a reluctant hero and a revered shot stopper
26 Fintan O’Toole: The enigma of Mary Lou McDonald
27 London Fashion Week: Simone Rocha turns female purity and virginity on its head
28 On healing and wild hurling: The re-education of Diarmuid Lyng
29 Greencoat Renewables buys Clare wind farm for €35.4m
30 Hugo MacNeill steps back from Goldman Sachs role
31 Why bosses should not be afraid of speaking out on Instagram
32 Eddie Jones continues to revel in putting rugby’s nose out of joint
33 Life as a female TD: ‘If I had a euro for every time I’ve been called the C word’
34 Should AIB compensate me for upsetting letter on arrears?
35 Dublin City Council says there are too many bus routes on the same streets
36 ‘Exposure doesn’t pay bills’: What artists say about freebie culture
37 Disability service residents may receive over €1m in refunds over ‘inappropriate’ spending
38 Hero of the Munich air disaster Harry Gregg dies aged 87
39 Public funds of €25m sought for Dublin library
40 Welcome to my Place . . . Estepona, Spain
Real news has value SUBSCRIBE