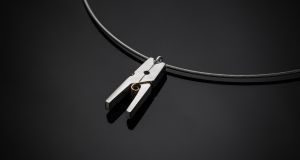 Everyday objects like the standard wooden clothes peg designed by a US violinist in 1853 often catch the attention of artists. Notably Claes Oldenburg whose Clothespin steel sculpture in Philadelphia was erected in 1975 as part of the city’s 1 per cent for art scheme. And there’s another huge wooden one pinching a hill in Belgium by Turkish artist Mehmet Ali Uysal. Here in Ireland Maynooth-based jeweller Yvonne Kelly has included a miniature silver clothes peg pendant as part of her current collection. Her jewellery, designed to be fun and wearable, has a quirky edge with names like “a little piece of my heart” bracelet, “you’re a star with a heart of gold” earrings as well as a flip-flop pendant. Kelly’s first job with an airline took her all over the world to far flung places before she took the plunge and became a goldsmith. All her pieces are made by hand in silver or gold and hallmarked by the Irish Assay Office in Dublin Castle. yvonnekellyjewellery.ie

Art and fashion unite this month in a collaboration between the Irish Museum of Modern Art (IMMA) and Kildare Village outlet shopping centre in a first of its kind in this country. Dorothy Cross, one of Ireland’s leading international artists known for her love of the sea (who can forget her ghost ship sculpture in the bay at Dún Laoghaire?) has created a limited edition silk scarf which has just gone on sale exclusively in the new IMMA pop-up in Kildare Village. It costs €250 and features the manes of Billy and Patch two horses who live on her land in Connemara. The commission marks the new exhibition at IMMA called Desire: A Revision from the 20th Century to the Digital Age – Kildare Village is the title sponsor. There is also an extensive programme of events for art and fashion fans to coincide with the exhibition under the campaign “Discover Art, Desire Fashion”.

Debbie Millington worked in the movies business in Hollywood – in the costume department of such films as Star Wars and Moulin Rouge – before returning home to Ireland and setting up her brand of vibrantly colourful print scarves. She quickly discovered that women love her scarves precisely because of their bold colour – “which has a positive impact on your mood and adds radiance and vitality to your complexion so each scarf is now designed with that in mind”, she says. Printed on soft silk with dramatic patterns, her new range comes in orange, green, red, blue, yellow as well as brown and black. She launches it in Brown Thomas this month as well as Arnotts, Harvey Nichols, Havana and Emporium Kalu in Naas and other high-end boutiques nationwide. Jester, a royal blue and red large silk scarf, €295, and bandana style classic square, €190 (pictured here) from the collection. Debbiemillington.com