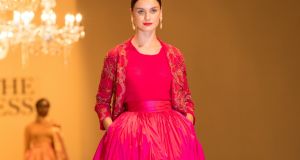 Silk taffeta skirt and knit by Lainey Keogh at Look the Business event which is stocked exclusively by Khan in Blackrock. Photograph: Magazine/Conor Healy

Anyone passing by Khan in Blackrock, Deryn Mackey’s boutique known for its classic minimalist style, will have stopped in their tracks recently at the sight of two full-length flamboyantly colourful outfits in the window – one in green, the other in amber – billowing silk taffeta skirts teamed with embroidered knits.

These are the work of Lainey Keogh and had pride of place on the catwalk at the recent Look the Business event at the RDS, styled by Catherine Condell. Keogh, like others including Paul Smith, is exclusively stocked at Khan which last month celebrated its 25th year in business.

Mackey’s eye for Irish and European brands aimed very carefully at a loyal customer base for work and play – means that there is a consistency to what she stocks that always appeals. Her sister Rachel who died tragically four years ago was a talented knitwear designer, but her label has been kept alive by Mackey who updates every season her familiar cashmere knits.

These are peppered throughout the various rails in the shop showing how well they integrate with other Italian, UK and French labels. “I have always believed in getting to know my clients well, knowing their likes and dislikes and being able to appreciate what style suits them,” says Mackey.

Put the date in your diary now. On Friday, March 6th, 2020 in Dublin’s City Hall, award-winning designers Don O’Neill from New York and Paul Costelloe from London will headline the fourth Irish Fashion Collective show. Organised in aid of Saint Joseph’s Shankill, O’Neill and Costelloe will join other leading Irish designers including Louise Kennedy and Deborah Veale to showcase their spring/summer collections. Other designers will be announced in the new year. Tickets at €100 each can be had from saintjosephsshankill.ie or email siobhan.grand@sjog.ie or by calling 01 2719204.

“Men shop on a mission, women for adventure” that’s the mantra of Shane Burke, a personal shopper who set up his own boutique Stylish Guy (called after his blog) two years ago at 53 Clontarf Road. Since then it has flourished and he has now set up an e-commerce site for his many customers.

“We are dressing the gentlemen of Ireland and providing them with affordability and top-class styling,” he says. Certainly if Google reviews are anything to go by, he is more than fulfilling his promises. Check out website thestylishguy.ie and find everything from white tees for €19, knits from €49, shirts from €75, jeans for mostly €120, suede Chelsea boots (€259) and wool macs (€349).

How to utter it

Uterque is yet another branch of Zara and though it has no bricks and mortar shops in Ireland, it can be found online and is particularly notable for accessories like scarves, jewellery and handbags.

It is pronounced “utter kay”, as we discovered at its spacious store in Barcelona airport and among its latest offerings are lush green embroidered velvet kaftans and navy padded long coats along with a terrific selection of earrings and necklaces. Visit uterque.com

Moving abroad alone: ‘You wonder why you are leaving everyone who has ever loved you’
10