Women’s conversations about clothes that are far from fatuous 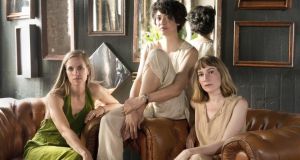 There are fashion books and there are style books, and then there is Women in Clothes, a dense, diverse tome from Sheila Heti, Heidi Julavits and Leanne Shapton. The 500-page compendium, published this week, was the brainchild of Toronto-based Heti, whose most recent novel, How Should a Person Be? gained literary acclaim and a sheaf of award nominations.

After realising that she had spent very little time wondering about her relationship with clothes (“With whom do you talk about clothes? This is something I have never done,” she writes), she sent a survey full of reflective questions to friends.

Questions delved into memory, personal experience and long-held opinions. Eventually the questions mutated into a survey. Heti, now joined by Julavits, co-editor of the Believer magazine, and Shapton, whose experience as a graphic novelist and artist would greatly inform the layout of the book, were on board. Hundreds of women answered an in-depth survey, and so Women in Clothes was born.

It is a riot of opinions from women of all backgrounds; women born as women and those not, women of different religions and none at all. There are women who go to psychoanalysis three times a week and shop for clothes afterwards.

There are women who work thankless, tireless shifts in Cambodian garment factories, stitching bras that cost a month’s wages for them (roughly $100) and scrabbling to find the money to clothe themselves.

Ana Kinsella, a London-based fashion journalist whose survey answers are dotted around the book, says: “It’s about conversations between women, entirely without the presence of men, which is rare enough in the female-dominated sphere of fashion, let alone in culture as a whole. Fashion without men is a different object, and you can forget that sometimes. The conversations women have with each other, unguarded, are scarce and so can be very special.”

Besides the survey answers, there are many different features; teen blogger and Rookie&#8217; websitemag.com editor Tavi Gevinson waxes about the implications of different colours, artist Miranda July dresses six women up in the others’ favourite outfits and stylist Bay Garnett shows her collection of leopard-print tops.

Actor Molly Ringwald interviews chameleonic artist Cindy Sherman on the clothing she uses in her work. A photographic essay by Katherine Bernard documents women as they braid their hair and gab about life. A woman looks back on her wardrobe and reflects on a lost love.

The photo series Mothers as Others documents the lives of survey respondents’ mothers before their children were born, an arrangement that is both poignant and personal.

While many fashion books pander to the lowest common denominator of consumption, encouraging women to reach for the unattainable fantasy of fashion, or are dense theoretical tomes adding weight to what is essentially a very light subject, this book is an entirely different proposition altogether. It is about commonality without being common, authentic experience without touching on cliche.

Women in Clothes rails against the narrow mindset that not only are clothes philosophically inconsequential, their very presence is a symptom of the worldwide evil of consumption. While not a decisive guide to women in fashion (there are far too many opinions to agree with them all), it is a very important book, lending depth not only to fashion, but to fashion writing as well. As a snapshot of a moment and a portrait of women today, Women in Clothes is a significant sign of the times.

Let me end with my own anecdote. I was introduced to a man outside a pub. Let’s call him Bob. He asked me what I did for a living. I steeled myself for the inevitable glazing-over of vision and slumping of posture that happens when I say, “I’m a fashion journalist.” Instead, an awkward pause. “Oh.” He exhaled quickly. “Well, at least you’re not killing children.” There was no note of irony.

Women in Clothes is published by Particular Books