What Italy’s ‘Peacocks’ could teach Irish men about dress sense 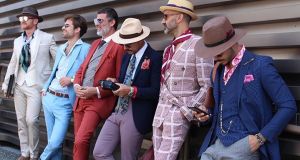 A flock of Pitti Peacocks in their sprezzatura poses.

“The way I dress, the style I’m drawn to ... it’s always been a part of me. There are plenty of pictures of my four-year-old self in ties, flexing my watch,” says Philippe TK, a Polish-Frenchman who lives in Switzerland.

Encircled by equally dapper men as he makes this declaration, their collective style is nothing less than impeccable – not a stitch, nor a pocket square, is dangling out of place.

Such commanding statements are par for the course at Pitti Immagine Uomo, a trade-fair-meets-menswear-fashion-week that captivates Florence each January and June.

Celebrating 30 years this season, its melting pot of pristine men – once the sole preserve of besuited Italians – now comprises all four corners of the globe, and has spearheaded the imaginative shifts taking place in men’s fashion today.

The designer shows are stunningly staged, harnessing the city’s Renaissance heritage when choosing venues, but most attendees flock for the street style alone; be they models and designers clad in spotless tailoring, or snap-happy photographers eager to shoot them.

The fantastically tongue-in-cheek Aaron Christian – whose Pitti Uomo mockumentary deserves multiple watches – dubbed these parading men “Pitti Peacocks”, whose every movement is dripping in sprezzatura (an Italian term which translates as ‘faux-nonchalance’).

Grouping together at the Fortezza da Basso, Pitti Uomo’s perennial base camp, each dandy moves through a steady stream of pre-meditated poses. Some gesticulate to each other mid-conversation, pretending to be unaware of the incessant camera flashes, while others look down at their phones with a similar air of insouciance. These actions are a far cry from standard Irish male behaviour, which is neither to preen nor parade but, more often than not, to merge into the crowd. By contrast, peacocking is in the Italian man’s bloodstream, and plenty of non-native Pitti attendees, from South Africans to Indians, feel closer to Italy’s fashion culture than their industries back home.

So how can Irish men, curious (if nervous) to experiment with stylish sprezzatura, inject their wardrobes with some Italian charm? For those fearful of colour, rest assured – plenty of Pitti Peacocks choose their suits in biscuit shades. Alberto Andrea Pastore’s style “is pretty muted”, gesturing to his ivory waistcoat and caramel suede shoes, “but I like it that way”.

“When extravaganza becomes excessive, in my opinion, you lose all sense of elegance.”

Seconding this stance is Serdar Uzuntas, a Milan-based menswear designer who emphasises “simplicity and comfort – your personal style should fit in with your lifestyle, instead of vice versa”.

For men looking to stay fresh on foreign lands (Italian temperatures comfortably reach 35 degrees in July), his sartorial tips are solid: “Alongside breathable sandals, it’s very important to carry a lightweight jacket and pants, [to minimise] sweat! I usually layer a tank top under a safari jacket, and I love tone-on-tone, mixing camel and white.”

Of course, Pitti wouldn’t be Pitti without some unrestrained colour fiends – cue Francesco Gaeta and Giuseppe Tucci, Salerno-based sartorialists whose threads turned countless heads. Their double-breasted suits and bling-adorned hats were identical in cut, but differed in colour: Francesco’s cobalt-blue and scarlet combo, offset by silver accessories, was the perfect yin to Giuseppe’s yang (aqua and cream, with gold accessories).

London-based Ravi Sagoo is the most colourful accountant you’ll ever meet: his three-piece suit sported lavender-blue checks, paired with a silken, burnt-umber tie. He acknowledges that both Irish and British men can be cautious in their tastes, but is nonetheless optimistic that once-reticent men, after the right dose of encouragement, will embrace a more experimental style.

“It’s so nice to create an individual look and I think more and more guys are accepting of that fact – they’re starting to step out of their comfort zones. We’re definitely moving in the right direction.”