Weatherproof Irish fashion: inspired by the landscape to keep out the elements 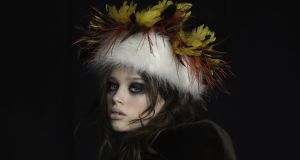 It’s not often you come across a fashion designer inspired by the Irish climate and the Irish light, but that’s what guides the work of Amie Egan, who embraces what she calls our “national cultural infatuation” with the weather.

A talented graduate of the National College of Art and Design, she has put her ideas to work in a small, innovative collection. Most of it is weatherproofed, and all of it has been handmade by her.

Egan’s dramatic Hunter coat, for instance, with its motifs of hare and deer – inspired by the wildlife, bogland and sunsets near her home in Tullamore, Co Offaly – was entirely handmade, having been painted, waxed (using a hairdryer for an even finish) and then sewn. It took nearly three days to complete, “so there’s a bit of work in it,” she smiles.

The pieces are expensive, but “they are limited edition and special,” she says.

“ I make everything myself and I know that not everyone can afford a coat for €850, but clothes are expensive to make – we have been deceived by the high street.”

Sustainability and slow fashion are important to her. An intuitive designer, she works from the dictates of fabric and colour and keeps functionality in mind while allowing for fantasy. Egan has created a mix of motif sweaters and wild dresses made with feathers and black sequins (“representing heavy rainfall on a night sky”) along with practical, good-looking oil-coated anoraks and parkas that reference après-ski wear, Irish countrywear, Arctic dress and kayaking.

“I love clothing that is linked to the environment, the landscape and activity,” she says. “I want to make clothes that are ageless and are about spirit and charm that will appeal to people who appreciate something handmade.”

She has a long list of credits to her name: she was the winner of the 15th Persil Irish Fashion Awards in 2014 (part of her winning collection was produced and sold by Dunnes Stores); she was a finalist for the River Island Bursary and Limerick International Awards the same year; and last year she was a finalist in the Irish Fashion Innovation Awards in Galway.She was also one of the designers at Create, Brown Thomas’s showcase of Irish design. One enthusiastic buyer of the Hunter in the store was an American tourist from Arizona while another fan of the coat is her grandmother in Kerry.

Having grown up in an artistic family – her father is an architect – clothing became a way of distinguishing herself from her twin sister Hazel, now a printmaker, when they attended different colleges after years in the same Sacred Heart school uniforms.

“I realised that clothes are important and that they could be an expression of who I am,” she says. “So the idea of doing fashion seemed natural to me, something about function and communication, but also with a lot of narrative and art in it too. It is a visual language.”

Egan’s current collection will be in the ARC Show at the RDS in Dublin on March 28th.

She will also be taking part in the Irish Fashion Innovation Awards in Galway on March 14th.

“I have started small and will see how it goes. It is daunting and a risky business, but I am determined to do it because if I am not working in a creative field, I feel unfulfilled.”