Waxing not waning with the wax jacket

Deirdre McQuillan on how a waxed jacket is made 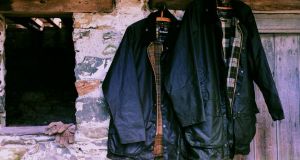 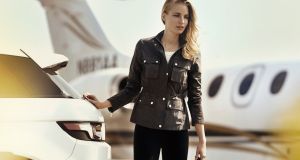 The small company in Newcastle went from selling oilskins to fishermen to being a global brand within the space of four decades – key stockists in Ireland are Brown Thomas, Arnotts, Louis Copeland and House of Ireland 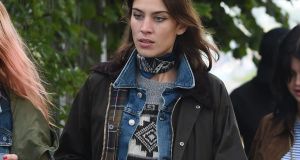 These are some of the items found in the pockets of Barbour jackets sent back to the factory in Newcastle to be reproofed, repaired or altered which tell their own stories of their owners’ lives. On a recent visit, we learn that some 14,000 jackets are returned annually to the repair workshop.

It is run with great efficiency by Jean Kershaw, who came there to work part time for six months and is still there more than 30 years later.

“There is no escape from Barbour,” she quips, setting down a large green box containing a selection of the items found in the pockets. “Between us here we have 232 years of experience, knowledge and skills.”

The smell of wax is pervasive in this quieter corner of the factory. We are told it takes 24 minutes on a machine to fit a new zip, that some 22-24 jackets are rewaxed every day and that many pieces are family inheritances handed down the generations.

Pride of place but beyond repair is what they call the Dudley jacket which is torn, tattered and holed and contains a picture of the culprit responsible for the damage – a guilty looking dachshund called Dudley.

Presiding over this company is the dynamic Dame Margaret Barbour known as the Queen of the Waxed Jacket. Hers is the story of how a small company in Newcastle selling oilskins and motorbike suits to sailors, fishermen, delivery men and dockers in an industrial age and in demanding weather conditions became a global brand within the space of four decades.

It all started in 1968 when her husband John Barbour died suddenly at the age of 29 leaving her with a small daughter, but with a determination to continue the company he had inherited from his grandfather. Today Barbour is sold in 40 countries, remains a fifth generation family business, is the holder of three royal warrants and has an annual turnover of more than £152 million.

In the 1980s Dame Margaret introduced the three waxed jackets that made the brand a household name – the Bedale, the Beaufort and the Border. They continue to be bestsellers worn by everyone from gamekeepers to festival goers and when Helen Mirren sported a Barbour playing the Queen in the Oscar winning film of the same name, sales in New York doubled almost overnight. Unlike Burberry, Barbour has not headed to more fashion forward extremes nor does it host extravagant catwalk shows. “They wrecked the tartan. No way would I go down that route,” she once told the Financial Times.

At their factory in South Shields approximately 3,000 wax jackets are produced a week based on over 50 style ranges – the cotton comes from India and is waxed in Scotland and in Northern Ireland. The Bedale, for instance, consists of 160 pieces and one worker told us it took her two years to learn how to do a pocket, a tricky manual operation. Cutting the patterns from a hundred layers of waxed cloth is another tough job, using heavy duty machines called Brutes.

The pride in heritage is a pride in garments made “fit for purpose” which goes right back to the company’s foundation in 1894. There is little that Gary Janes, head of outerwear, doesn’t know about the history and construction of weatherproof clothing. He points out why cotton velvet was used on collars, how petroleum wax was eventually found to proof garments after failed experiments with fish oil and tar. “You learn from the garments by analysing them”, he says. “Workwear is not preserved like aristocratic clothes, not salvaged, so to have workwear from the 1920s is very special.”

From their archive items, he points out details such as gutted pivot sleeves that don’t lift up the jacket when arms are raised, the advantages of angled pockets on motorcycle jackets for maps or flanged godets to stop rain ingress – “brilliant ergonomics”.

Apart from waxed jackets, Barbour has developed and extended its products and brings out two seasonal ranges with about 500 styles. This was evident at the huge factory outlet shop which contains items from previous collections at a fraction of their normal retail price.

A popular spot with locals and visitors, it contains waxed jackets of all kinds, quilted numbers with corduroy collars, waistcoats, tweed jackets, knitwear, socks, shirts, ties, hats and other accessories.

Although every jacket is sold with an accompanying tin of wax with application instructions, most people, according to Kershaw, discover how difficult it is to use and generally send the worn ones back for professional rewaxing. It takes about four weeks to have this done, costs €40 and one is best advised to send the garments in the warmer months when demand is not so high. But remember; check the pockets before you send.

Buy yourself a dream. . . with the planning headaches sorted
3