Want to do a different kind of debs? Give your outfit a vintage twist

A tuxedo suit would stand out from the crowd 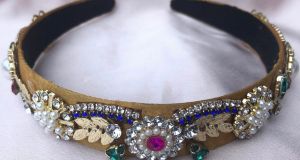 The exams are over, the results are out. School days are finished and that rite of passage called the debs (known as the prom in the US) will be exercising the minds and hearts of all those marking the end of secondary education for the next few months. The farewells, the celebrations. The gúna. The corsage. The make-up. The hair. The fake tan. The limo. The date. The apprehension. The excitement.

It was estimated in 2013 that the average spend on the debs in Ireland was between €695-€825, a hefty figure covering all aspects of the event not to speak of the dress – the guys getting off less severely armoured with a rented tux and a dickie bow. Blame it all on the influence of American teen movies like Grease, Teen Wolf, Pretty in Pink, Flashdance and others that invest the proms with teenagers looking like glamorous Hollywood stars creating a subversive myth with a powerful effect on susceptible teen viewers. Not like that in the Irish cultural versions which are a lot rowdier with a lot more exuberance, ruaille buaille and forgettable selfies.

Trends in dressing up for the occasion vary from year to year. For 2019, according to debs’ fashion authority Marian Gale, “it’s all about the back” and sweeping necklines, jewelled and beaded floor-length dresses are the standard staples of the full-on princess look. However, for those who dare to be different in an age of diversity, we have selected some alternatives for the night, many of which can be reused and restyled and not rented, bought or bankrupted parents.

How to break the common dress code was brilliantly demonstrated recently when top model Cara Delavingne wore a black tuxedo suit with skinny trousers, topper and black stilettoes to the wedding of Princess Eugenie in London and stole the show. With androgyny in mind, what couple would have the courage – and style – to wear tuxedo suits? His a floral or deep blue number, hers in a pale watery green satin?

Stand out from the crowd in a vintage dress with a 1950s air that certainly no one else will have, a sequined jumpsuit that can-do double duty at another event or a top-to-toe coverup style that runs against more flesh baring variations. Who wouldn’t shine in the evening light in a silver dress? And with a couple of exceptions nothing will bust the bank and money spent on some beautiful accessories – jewellery or shoes – could last as long as the memories.

Fair Deal nursing home scheme and the family home: how does it work?
3

Online buyers snap up rural properties in one day auction
8