While the camera crews and mobile phones buzzed about the hall, Victoria Beckham ler her clothes do the talking 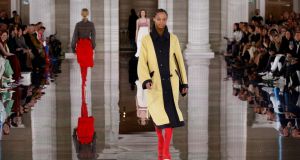 Victoria Beckham likes to show in very grand places – on a wet and windswept Sunday in London, her Autumn/Winter collection took place under the frescoed ceilings of the historic royal Banqueting Hall in Westminster, the floor lined with mirrors for the occasion.

Sitting front row were the Beckham family beside Vogue editor-in-chief Anna Wintour (clad in a camel coat and oversize shades), David holding Harper on his lap. Camera crews and mobile phones buzzed around them while Cate Blanchett’s note of apology for being unable to attend was posted on social media.

This was a very strong collection that moved on from the bourgeois 1970s aesthetic of her previous season. “I wanted to explore how to honour tradition but challenge convention,” said the designer. “I was thinking about refinement and rebellion and inspired by different ideas of women.”

What this meant was revisiting and reworking silhouettes from summer, abbreviating proportions and using heritage tweeds and knits.

The show opened with 10 fluid black dresses, some with jewelled leather belts, illustrating the wide offering. There was one for the woman who likes a plunging neckline, one for the more demure taste with a high neck and billowing sleeves while another, lingerie-style with spaghetti straps, was more suited to the sylvan shape. All were graceful and elegant.

Coats were particularly notable and desirable. Oversize, all enveloping, they came in big-tent shapes or midi lengths with funnel necks, while her loose, untied camel trenches remain effortless, safe streetwear. One in black, yellow and white looked fresh and bright – plenty of choice for the modern city woman in winter.

Separates – knee-length kilts with plaid shirts or with high-necked knits in vibrant colours such as yellow, sky blue as well as navy – were equally appealing, as were the soft silk blouses with billowing sleeves and ditsy dot dresses. Contrasts worked throughout – a long, loose navy gown was anchored with a gold neckpiece, while trouser suits came in plain navy wool or tweed.

“She has reworked the shapes from last year,” commented Shelly Corkery womenswear director of Brown Thomas after the show. “Her use of heritage fabrics was amazing and she has offered three different lengths – long, midi and knee-length for the first time. This was definitely one of her best collections. She has really come into her own,” Corkery said, adding that Beckham, along with Dolce & Gabbana, are now the two top international brands in the store.

Earlier on Sunday, Katie Ann McGuigan a rising young Irish star in London, mixed fashion with furniture for the first time at her show staged in the British Fashion Council Discovery Lab on the Strand.

Coming from a family of furniture designers, her set featured a sofa upholstered in seafoam coloured velvet and chairs in Dorchester linen in her own prints and made by her family’s business in Newry.

As a student, McGuigan deliberated between studying photography or fashion eventually opting for the latter, but her collections have always drawn from photographers and this one was no exception. Irish born photographer Tom Woods was her inspiration and his portraits of family life in the north of London in the 1970s and early 1980s powered her show and her prints which were drawn from furnishings inside the homes of the photographer’s subjects.

Airy silk dresses in shades of green graphic print were overlaid with silk organza, while handsome trench coats reworked the print in vinyl. Hand-dyed joggers and hoodie sets, signature pieces, were given a new twist while her hand-printed puffa jackets were made with filling from recycled plastic bottles. With her continuing commitment to sustainability, her knitwear, which included Aran trousers (40 balls of yarn!), were hand-knitted in London with recycled yarn. New this season were printed shoes also handmade in London. McGuigan will be taking her collection to Dublin for the ARC fashion show at the RDS on the 19th March.