Topshop? Women have moved on, filled out and grown up

It used to be fun and edgy. But the teetering fashion chain got complacent 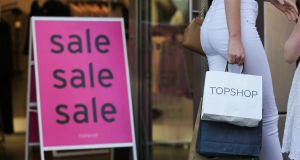 Closing down: six Arcadia Group stores in Ireland, including the flagship Topshop on St Stephen’s Green, are to shut. Photograph: Daniel Leal-Olivas/AFP/Getty

Topshop was nigh on unassailable a decade ago. At the launch of its New York flagship store, in April 2009, crowds of young women screamed “We love Topshop” and queued around the block.

Once they were inside – where Kate Moss and Philip Green, the fashion chain’s owner, cut a relatively regal presence at the ribbon cutting – they were limited to buying five items each, such was the demand.

Back then Topshop’s USP was being fun and edgy, especially compared with the more pedestrian, preppy offerings of J.Crew, Club Monaco or Banana Republic. And the price was certainly right, as were the quality, detailing and creative flair.

The opening of Topshop’s Irish flagship, on St Stephen’s Green, four years earlier, was every bit as theatrical, with Green declaring that he had brought a little bit of Oxford Street to Dublin.

But fashion has changed, and the gleaming jewel in Arcadia Group, Green’s conglomerate, seems to have become one of its major casualties. As part of the businessman’s make-or-break plan to save his fashion empire, six of his shops in Ireland – Topshop plus Dorothy Perkins, Evans and Miss Selfridge – face closure. Among the four Dublin branches to shut are the Topshops on St Stephen’s Green and at Jervis Shopping Centre.

High rents have been blamed, but other things are also amiss. Topshop flourished in the recession, after all, so why, in a period of relative prosperity, have things gone pear-shaped?

In a post-#MeToo climate, young women have seemingly clocked the allegations of sexual harassment, racist abuse and bullying levelled at Green recently, and are reacting with their wallets. Although he strongly denies the claims, the accusations seem to have damaged consumers’ perception of the brand as being for fun, fearless fashion followers.

Online rivals have also dented Topshop’s hold on the market. As the chain’s prices climbed and climbed, young women turned to fast-fashion sites like PrettyLittleThing, Boohoo.com and Asos for their clothes, and to Instagram for inspiration.

Depop, a sort of mobile-first, Insta-adjacent eBay, has 10 million users and takes more than €350 million in sales, a figure that has doubled year on year. And Ireland was among its fastest-growing markets in 2018. Its shoppers are increasingly mindful of sustainable fashion but are also turning their backs on the vintage, hipster look that has seemingly dominated Topshop’s rails for years. (Belts from Gucci and other designer labels were the biggest draws on Depop in 2018.)

This morning the comedian Joanne McNally tweeted: “I’m constantly trying to give #Topshop my money and rarely find anything in store to buy... it’s turned into an absolute snore fest.”

There’s the rub: the women for whom Topshop was a premier destination have moved on, filled out and grown up. The hemlines aren’t right for work; the sleeves suit only the most gamine and bingo-wing-free youngsters; the trousers rarely factor in the possibility of having an actual arse; the heels are too vertiginous to consider when you’ve a modicum of common sense and places to go.

Topshop refused to evolve. If anything it doubled down – and lost the interest of Generation Z along the way.

The chain has certainly become collateral damage in Philip Green’s swift dive from grace, but let’s not absolve its creative brains of blame either. They got complacent and conceited enough to believe customer loyalty would win out. It didn’t, and now Topshop is on the back foot – the last place anyone wants to be in fashion.

'I contracted the virus, and then I lost my mum'
6