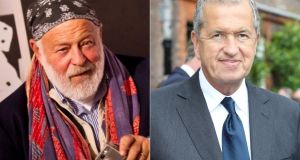 Two leading fashion photographers, Mario Testino and Bruce Weber, have been suspended from working with fashion magazines including Vogue after models accused the photographers of sexually exploiting them.

Lawyers for Testino, known for photographing the British royal family, tried to discredit their accounts while Weber denied the claims to The New York Times, whose investigative report detailed a string of allegations.

Anna Wintour, artistic director of Conde Nast, which publishes magazines including Vogue and GQ, said the publisher would not work with the pair for the “foreseeable future” following revelations.

Testino, who took the Duke and Duchess of Cambridge’s official engagement photos and was given an honorary OBE in 2014, was accused by 13 male assistants and models of subjecting them to sexual advances.

Ryan Locke, a model who worked with Testino on Gucci campaigns, accused him of being aggressive and flirtatious throughout shoots, adding: “He was a sexual predator.”

Photographic assistant Hugo Tillman said Testino once grabbed him on the street and tried to kiss him and, a few weeks later, pinned him down on a bed until he was removed by another person.

Another assistant, Roman Barrett, said Testino masturbated in front of him, and added: “Sexual harassment was a constant reality.”

One anonymous assistant said Testino masturbated on him during a business trip, while another said the photographer groped his backside, the newspaper reported.

The New York Times reported that lawyers for Testino (63) said the sources could not be considered reliable.

US photographer Weber (71) was accused by 15 current and former models of subjecting them to unnecessary nudity and coercive sexual behaviour, according to The New York Times.

Model Josh Ardolf said that during a nude shoot his genitals were grabbed by Weber.

Model Bobby Roache said Weber tried to put his hands down Roache’s trousers during a casting in 2007.

In a statement to the paper from his lawyer, Weber said: “I’m completely shocked and saddened by the outrageous claims being made against me, which I absolutely deny.”

Wintour said that the allegations against her “personal friends” have been “hard to hear and heartbreaking to confront”.

“I believe strongly in the value of remorse and forgiveness, but I take the allegations very seriously, and we at Conde Nast have decided to put our working relationship with both photographers on hold for the foreseeable future,” she said in a statement.

The publisher recently distanced itself from Terry Richardson in the wake of the Harvey Weinstein scandal, despite the denied claims about the photographer mistreating models having been aired years previously. – PA