Time has arrived for watches from yesteryear 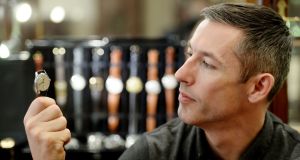 Shane Hegarty: The watch didn’t even work, having ticked its last seconds a short time after my granduncle’s death. Photograph: Alan Betson

The watch hadn’t been worn in half a century. Its simple white dial was dulled with age, its crystal marked with scratches. The leather strap was dry and frayed. The watch didn’t even work, having ticked its last seconds a short time after my granduncle Jack’s death.

When my mother brought it back into the light during a house move late last year, the watch snapped shut the distance between me and an uncle I had never known. Every scratch and dent on its case was a part of his story. The crease in the aged strap matched my wrist size perfectly.

It was made by a long-defunct brand few knew then, and almost nobody knows now. But its dial said it was Swiss made, and I guessed it had been made sometime in the 1950s. That was enough. It could be brought be back to life.

In the digital age, the mechanical watch is a marvel of sorts. It’s outdated. It can be fragile. It won’t measure your pulse or bleep out notifications. It might need winding every day just to keep ticking, and it will certainly need a service eventually. And it won’t be as accurate as even the cheapest digital or quartz, battery-run watches – maybe not even within a minute or three a day.

But what other piece of technology can sit unused for decades only to be sprung back to life again and be as useful now as it was when it was made? What other tech will carry its emotional resonance? None of us will hand down our phones to our kids. No one will press a FitBit into their son’s hand on his 21st birthday and say: “Just as my father gave me his FitBit for my 21st birthday, and his father before him...”

“That’ll still be going when you’re dead. That’s the best thing about it,” says Stephen Cullen of Dublin’s Dawson Jewellers when I bring my uncle’s watch in to be fixed up. “That’s the thing about older watches, you can take them all apart like an old car and you can get your parts and put them back together again. When your phone gets too old, no one’s going to fix it for you. You’ll just get a new phone.”

There must be countless old watches lying around in drawers and attics all around Ireland, many ready to be serviced and brought back into use. Some will have purely emotional value, others might have a bit more than that. An old Rolex, Heuer or Omega lying around at home will likely have gathered value as well as dust.

Cullen shows me a Rolex Submariner on display in the shop, with the aged dial patina that might look like it needs a refresh but which collectors prize and wouldn’t want touched.

“That watch belonged to a guy who had it since 1986, bought it brand new. He brought it in and I said ‘The bezel [outer ring surrounding the crystal] is scratched,’ but he said ‘I don’t want to pay €450 for a service on that.’ And I said ‘That’s a very old watch and a very valuable watch as it is,’ and he thought the colouring was worn and looked wrong. And I said, ‘Look, it’s worth every penny.’ But he said it wasn’t for him and we traded it in. He wanted something much more modern and looked more flash. That’s what he liked. He told me had paid 697 punts, actually he had the receipt, and it’s worth €12,500.”

The vintage watch world has seen huge growth in interest and prices in recent years, in thanks to the connectedness of the internet. Although connected by social media – and occasional organised meet-ups – it can be a lonely obsession in a world in which most people don’t know, or care, about the chasm of difference between a Daniel Wellington fashion watch and, say, a €35,000 Patek Philippe.

These obsessives will be the ones scanning a wrist every time they shake hands in the hope of seeing something worth striking up a conversation over. (I know. I am one of them.)

The collectors are, in the main, men. The watches that sell at big prices are almost exclusively men’s. Perhaps it’s because women already understand, and have access to, the power of jewellery not just as an accessory but as a piece of personal history, a connection with a loved one, a small wonder of design.

Matt Hranek is author of current watch-collectors’ must-have book A Man and His Watch: Iconic Watches and Stories from the Men Who Wore Them. It’s a beautifully accomplished idea: photograph a watch and put its owner’s story beside it.

“The publishers asked me: ‘Are we going to have pictures of people with the watch?’ And I was like, ‘No, no, no,’” says Hranek. “The hero is the watch. The owner is transient.”

The result is stories of watches that have been rescued, handed down, worn on the wrist at crucial moments in life, but also stories of great design and technological eureka moments, from a battered Timex to rare Rolexes.

“A watch makes the journey,” says Hranek. “I’m working on a new book called A Man and His Car, which has very similar emotional connections, but it’s a much different journey with those objects than watches. It’s very similar in terms of the intense emotional connections, but in many ways it’s much easier to have a watch involved in every aspect of your life. A car becomes a major pinnacle and has emotional reference points, but it doesn’t have all that minutiae in between. It’s just because of watches’ cost and portability, probably.”

It’s also because you can fix an old watch relatively quickly and for much less than the price of a new one, strap it back on the wrist and off you go to add your own history to it. Within a couple of weeks, my uncle’s watch was fixed up and, having been dormant for over 50 years, it works wonderfully now.

Sure, it’s still not perfect by modern standards. It’s slow about three minutes a day. It needs a winding every day or its power will run down. And because I refuse to buff out a single scratch from its crystal, in strong sunlight those scars cast streaky shadows across its dial.

I love every bit of it. My uncle died years before I was born, but I’m connected to him every time I wind his watch.

The popularity of vintage watches was confirmed in October 2017, when Paul Newman’s old Rolex sold for a world-record $17.8 million at a New York auction. The distinctive Rolex Daytona had become firmly associated with him, while also being a design classic.

“Newman didn’t talk about watches,” explains A Man and His Watch author Matt Hranek. “He talked about time. Time was valuable to him. He was a racer, and that watch was about calculating speed. So you have this iconic character who has so much weight in the world watch he really did not give a flying crap about watches.”

Perhaps the only other watch that could be as iconic as his would be the Omega Speedmaster Neil Armstrong wore on the moon – but that went missing many moons ago.