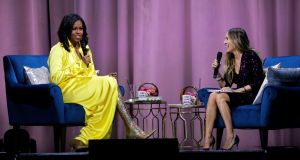 On the last stop of her international book tour this year, Michelle Obama spoke with Sarah Jessica Parker for an audience in New York, while wearing a €2,900 pair of gold sequinned Balenciaga thigh-high boots.

The former first lady of the US told the actor about her fashion choices during her time at the White House, and how her approach to what she wears has changed.

Obama paired the boots with an electric-yellow silk wrap dress from the French designer’s new spring-summer collection. The dress’s shape, with a slit at the front, showcased the Balenciaga pointed stiletto Knife boots.

Speaking to Parker about the impact of her fashion choices while in the White House, she said: “I did know that my clothes were making a statement. I understand that to be the case. Before you get initiatives off the ground, the press – that’s all they’re looking at.”

Obama explained that she and her long-time stylist, Meredith Koop, chose to use this attention to champion emerging, and often younger, designers from diverse backgrounds. “We decided, why don’t we use this platform to lift up some new, young designers who normally wouldn’t get this kind of attention?” she said.

One of Obama’s most well-known choices was Jason Wu, a Taiwanese-born designer who created the white gown which she wore to her husband Barack’s inauguration ball in 2009. She continued to wear his designs throughout her time in the White House.

“He’s young, his story was amazing, he didn’t expect it, [and] he didn’t feel entitled to it. Because you learn there are people in this scene who feel entitled to these things because they’ve done it for a while. And I sensed that feeling of, like, ’ Oh, you think this is just yours?’ There are a lot of people out here trying to make it; young people, women, black folks, and immigrants.”

Along with Wu’s designs, Obama also wore pieces by then-emerging designers such as Christian Siriano, Brandon Maxwell, Thakoon Panichgul, and Maria Pinto. Obama’s approach to what she chose to wear while at the White House had to be practical, she has said; an average day could include delivering a speech on policy to business leaders, followed by playing basketball for the cameras.

Since leaving the White House, Obama’s style has continued to evolve and become more personal. “Now, I’m free to do whatever,” she said “There is no message. The boots are telling you no message. They were just really cute. I was like, `Those some nice boots!’”

Minimising your risk of stroke during pandemic is crucial
4

Start them stirring, knife skills at four: how to teach kids to cook
7

‘I wrote a part for my husband. By the time filming was over, so was our marriage’
Real news has value SUBSCRIBE