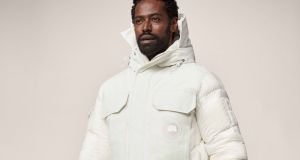 The new Standard Expedition Parka to be introduced in January

In a turnabout for pandemic-era retail trends, a new store opens on Dublin’s Grafton Street this week. Canada Goose is a Canadian company known for its expensive down-filled, fur-trimmed parkas and jackets with their signature red, white and blue badges. What was a small specialist industrial outerwear company founded in a warehouse in Toronto 60 years ago is now a global luxury brand thanks to the efforts of the founder’s grandson, CEO Dani Reiss who took it over in 2001.

“Beyond northern Canada or Antarctica, no one had really heard of us, but after hearing how our parkas were keeping people warm and often alive in extreme conditions, I realised we had something special. People want products that deliver and last for years, not a season”, says Reiss responding to questions I was asked to submit. Laurie Skreslet, the first Canadian to summit Mount Everest, for instance, did so in a parka the company developed in tandem with the mountaineer, still in production and called after him.

Canada Goose’s all-purpose jackets, staples on well-heeled New Yorkers and elsewhere, have become status symbols for those who have never set foot in the Arctic nor gone on polar expeditions. The Dublin shop, the fifth in Europe, follows those in London, Paris, Milan and Berlin, the latter opening last month.

The brand was introduced to Ireland by Brown Thomas (which does not stock any fur-trimmed items), but the new store is just a few steps away, will carry more than 140 styles including parkas, lightweight down rainwear, wind wear, knitwear, childrenswear and accessories as well the new Hybridge Jacket. January will see the introduction of the Standard Expedition Parka made from recycled and undyed fabrics, 100 per cent responsibly sourced down and reclaimed fur which will be exclusive to the Dublin store.

Canada Goose has been the target of sustained campaigns by anti-fur activists protesting against trapping methods of wild coyotes and harvesting of goose down. Reiss responds by saying that “we use real fur because it is the best natural material available and a fur trim helps protect the face from frostbite. Wearing real fur is a personal, individual choice and we respect that choice.” He also referred to the company’s sustainable impact strategy in which there is a commitment to introduce reclaimed fur by 2022. “Using reclaimed fur is making a sustainable material more sustainable and it is the right thing to do for the environment, our business and the future of our planet”, he maintains.

Performance remains key. Though often compared to Moncler, the Italian luxury brand known for its expensive, quilted jackets but arguably more stylish, Reiss argues that Canada Goose jackets “are always built for function first ahead of anything else” and that “made in Canada is one of the strongest pillars of our success and is like a Swiss watch made in Switzerland, it’s intrinsic to the product.”

A visitor to Dublin, Reiss admires the city as a “walkable one with the great outdoors right on your doorstep”; coincidentally, his future plans include footwear, with Baffin, another sturdy high-end cold weather Canadian brand,   recently acquired by his company. The launch is planned for winter next year.