The Zara empire: where did it all go right? 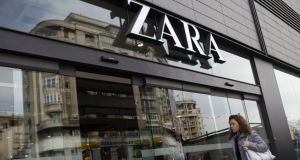 There are two things to be said about Zara. The first was said by its founder, Armancio Ortego, who only called his new shop Zara because the name Zorba was taken. “Selling fashion is like selling fish,” he said. “It’s worth more when it’s fresh.” This has led to Zara having one of the fastest supply systems in the fashion business, feeding its 6,000-plus stores.

The second thing to be said about Zara is that it is redefining the high street. In Dublin it is hoping that that is literally true. When this newspaper reported on Thursday, July 10th, that Zara’s sister brand, Massimo Dutti, had rented the old HMV building at 65-66 Grafton Street, the news was greeted with enthusiasm by Richard Guiney, CEO of Business Improvement District, which represents 2,500 city-centre businesses. “It’s a vote of confidence for the city,” he said. “We’re delighted. It’s a good brand, attracting the right sort of customer to the city centre.”

Grafton Street has had a tough couple of years, with a demoralising number of vacant shop fronts. Massimo Dutti, on the other hand, is part of the phenomenal success story of the Inditex fashion supergroup that also owns Zara and has pretty much conquered the world.The other Massimo Dutti store in the news, when it opens in October, will be on Fifth Avenue in new York.

Massimo Dutti is Zara’s more conservative and expensive sister. At the moment it has only one store in Ireland, at the Dundrum Shopping Centre. “It’s very Ralph Lauren,” says one satisfied male customer. And it is true that Massimo Dutti does a lot of linen, a lot of well-cut blazers and denim-look shirts: exactly the sort of reassuringly classic clothes that sell well during a recession.

Female customers at the Dundrum shop, who I interviewed while wearing my Massimo Dutti skirt, said they shopped there for items such as work trousers and blazers. “They’re great for that,” says Debbie, who is in her 50s and works in sales. Massimo Dutti also has a busy traffic in male customers. “My brother and my boyfriend shop here quite a lot, more than I do,” said Julia, who is in her 30s. Iindeed I met a cousin of mine going in: he likes Massimo Dutti because it’s not covered in badges declaring who made the clothes, he said.

Shopping in the Inditex stores is a global experience. First of all you’ll see other versions of your clothes being worn all over Europe – and Russia and China and Japan. Then there’s the sheer breadth of the group’s appeal, particularly of Zara’s stock. Of the women around the table at The Irish Times editorial meeting last week, several were wearing Zara tops. My mother shops at Zara. My nieces shop at Zara.

‘Disposable clothes’
“They’re disposable clothes,” says one fashion insider. He is happy to note that Massimo Dutti’s sizes are bigger, although he will still squeeze into Zara clothes because they have more edge. “I got a black velvet jacket there, which was exactly the same as a Dolce and Gabbana jacket in Brown Thomas. It was €800. The Zara jacket was €80. I was beaten into it, but it looked great.”

Here we have several of the features of the Inditex chain. Profits for 2012 were reported at £1.3 billion (€1.5 billion), and helped Amancio Ortego overtake Warren Buffet as the third-richest man in the world.

Zara, particularly, is disposable fashion. Although no one says so. The group is international but its sizes are stuck in Spain. The sex characteristics regarded as a good thing in other areas are a liability here. If you have any sort of breasts at all, or if you are a man with broad shoulders, Zara clothes won’t fit you.

The copying in Zara, and to a lesser extent in Massimo Dutti, is so accurate that there is no shame in shopping there. On the contrary, fashion insiders boast of their Zara finds. Kate Middleton wore a Zara dress the day after her wedding.

Zara has skewed the fashion world a little. “I get very annoyed when I’ve worked hard to buy something for hundreds of euro and I come into the office and see all these younger, prettier women wearing what looks like exactly the same thing,” says a woman who has worked in fashion for decades.

“The thing is, I could afford €800 for a suit,” says the male fashion insider, who is small and slim. “But I buy Zara because it fits me better, and it’s sharper. I could buy Armani, but I prefer Zara.”

In many ways Zara is too good. You can’t walk into a Zara shop without seeing something fashionable and affordable – doing this story has cost me a fortune – and Massimo Dutti was thronged. In business circles the Inditex group is regarded as almost too successful.

No one thought its financial results could equal those of last year – the Financial Times predicted as much last month – though the figures for the first quarter of 2013 were actually up 2 per cent on last year, with net sales of €3.6 billion and a net income of €438 million.

Massimo Dutti’s move to Grafton Street should be seen in the context of this retail miracle. As a fashion analyst put it: “When you are a globally successful business, you can afford to take certain risks in markets that are in decline, knowing that over time the market will pick up, and you can afford to wait. The other advantage in growing your business in a struggling market is that there are more attractive sites available at more attractive prices.”