The real deal: modern brides tell the story of their big day

Secretly tying the knot and having your dog as your best man, Alanna Gallagher hears real wedding stories 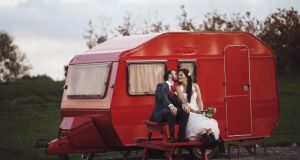 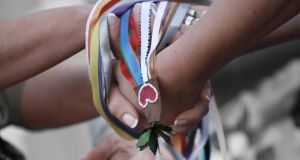 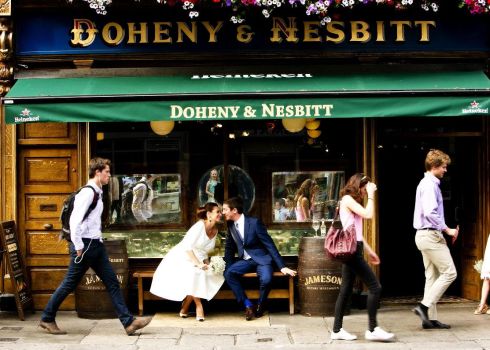 Three cheers for a slick city do
Karen Doyle met Alan Munnelly in Renards, had a civil ceremony in City Hall, raised a glass to their big day in Doheny & Nesbitt’s and had a restaurant reception in Residence.
Photograph: John Ryan
johnryanphotography.com

Karen Doyle had done the big castle wedding before. Second time around she and Alan Munnelly, whom she met in Renards nightclub, wanted the focus to be on them and on their wine, food and hospi- tality. While the two had grown up in Castleknock, they didn’t know each other until they spent “about six hours talking” on that first night in Renards. Five years later, Munnelly proposed by writing “Will you marry me?” in the sand on Bertra Strand, outside Westport, Co Mayo.

To compensate for the fact that they wanted a small, intimate wedding they decided to throw a big engagement party. That same week, Doyle discovered she was pregnant.

She was five months pregnant when she said “I do”. The 1950s waisted dress she wanted to wear had to be adjusted by Denise Assas Couture to an empire line to flatter her bump. Her friend Damian Byrne, Arnotts head of creative, made her headdress and, bump or no bump, she managed to spend the day elevated atop a pair of five and a half inch-heel Jimmy Choo shoes.

Both wanted to have their wedding in Dublin so that they could showcase the city to their friends. On the night before, Doyle stayed in the Merrion Hotel and drove to City Hall where their 33-guest party was waiting. Afterwards, they had a coach to transport them to Doheny and Nesbitt’s pub for some drinks.

From there they walked around the corner to Residence, a private club on St Stephen’s Green, stopping off in the Green to take some photos.

They had pre-dinner drinks in the garden and dined upstairs afterwards at Restaurant 41. After dinner, the party retired to the piano bar where the resident pianist accompanied a bit of a sing song.

“Getting married the second time around, you know what you want,” says Doyle. “It’s more about you as a couple. It’s also more affordable. You don’t want to spend crazy money again.” 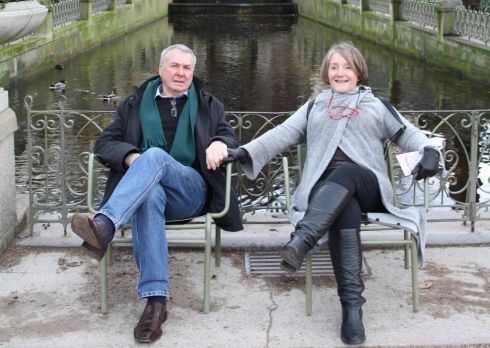 A family affair
After 25 years together, Rebecca and Jack finally tied the knot secretly, only texting their families from the airport as they headed off on a honeymoon with their two children in tow.
Photograph: Alex and Stephen Hayden
Rebecca Morgan was resistant to the idea of marriage. She and her partner, Jack Hayden, had been together since 1987, but didn’t marry until December 2012. Hayden had been married before and Rebecca Morgan didn’t see any reason to change the status quo, being “superstitious” about marriage changing their relationship dynamic after a quarter-of-a-century together. “We were married already in all but name,” she explains.
The couple has two children, Alex,(20), and Stephen, (18). While Jack Hayden was keen to tie the knot, Rebecca Morgan procrastinated. “I wasn’t in any hurry, although it kind of made sense financially, from an inheritance point of view. What we were already doing we were doing was for life.” Getting married just officiated it.”made it official, she said says.
The couple didn’t exactly elope but decided to fly somewhat solo by not telling their extended families and friends about their nuptials. Both had large families and felt they couldn’t get away with successfully editing down numbers. “Running away avoided those politics completely,” Morgan says Rebecca explains. They married in the registry office on Dublin’s Grand Canal Street two weeks before Christmas with their daughter Alex as one of their witnesses while their son Stephen was Jack’s best man.
Afterwards, the party of five they lunched at the Green Hen where the staff organised a surprise glass of Champagne and a cake, details Rebecca Morgan hadn’t considered.
The newly weds and their children left the restaurant for the airport and from there texted friends and family to tell them the good news before honeymooning in Paris. While Stephen wanted to climb the Eiffel Tower, Alex declined. She wants her own proposal to take place at its zenith and “didn’t want that moment ruined”, as Morgan put it. 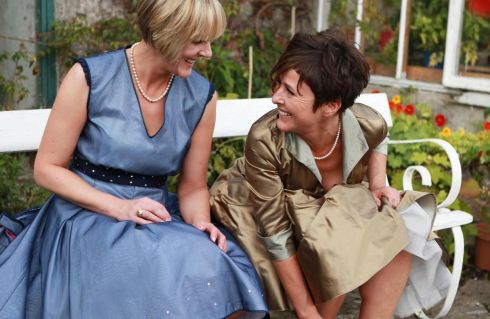 Brehon law handfasting ceremony
Girl meets girl on blind date, they fall for each other and declare their love in a civil partnership followed by an ancient handfasting ceremony. Their dog Harvey played the role of best man.
Photograph: Pinhole Productions
Louise Allen met Lisa Doherty on a blind date at the now defunct Alternative Miss Ireland competition. The attraction was pretty immediate, Allen recalls. On their second date, each girl brought along one of their sisters to “vet” the other.
“We always wanted to have our relationship witnessed by our friends and family and formally recognised from a legal perspective,” Allen says.
“We had to make a decision whether to wait for [same sex] marriage [to become legal] or not.
“Our ceremony was a public declaration of our love for each other and our commitment to each other. We decided not to wait. We wanted to tie the knot while we still looked good in our gúnas.
“The ability to register our union legally and to be considered each other’s spouse were two reasons to tie the knot but the service was really about recognising the rite of passage that civil partnership is.”
The service took place in Kilkenny registry office. The following day, the women held a Brehon law handfasting ceremony, during which Harvey, Allen’s rescue dog of 13 years – who was wearing a tuxedo on the day – bounded across the lawn to witness the moment as if he were the best man.
The women followed the service with a party in a marquee in the garden.
“The energy that we felt while standing up publicly declaring our love and commitment to each other is something that has stayed with both of us,” Doherty says “Civil partnership has fundamentally changed our relationship. It has made it stronger.”
Will we get married if the law changes? “Yes. Doing it twice would be twice the fun.” 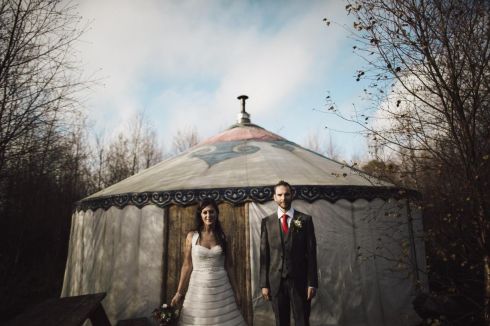 Caravan of love
Sarah Brennan and Dave Sherlock wrote their vows for their homespun humanist wedding. They got married in a tin church and had a festival-feel reception complete with on-site glamping.
Photograph: Pawel Bebenca pawelbebenca.com
Sarah Brennan and Dave Sherlock, met when they were both just 16 years old, working part-time in Dunnes Stores on Limerick’s Sarsfield Street. Together 12 years, the childhood sweethearts love to go to music festivals and wanted their big day to reflect this element of their personality. They didn’t want “to do the big hotel thing”, but had more than 150 guests to accommodate.
Mount Druid, with its onsite glamping in the form of Mongolian yurts, Father Ted-style caravans and shepherds huts, appealed to their festival sensibilities. They also liked the fact that they could hold a humanist ceremony in the corrugated tin church.
Through the Humanist Association of Ireland, they got in touch with chaplain Billy Hutchinson who guided them through writing their own ceremony, offered advice on what would and wouldn’t work and when to punctuate the service with music.
“While we’re both family orientated, neither of us is religious,” Sarah says. “Every word spoken was geared towards us and our relationship. We really enjoyed writing the ceremony and picking the music.”
The humanist ceremony meant they could do it their way. “If I’d wanted to I could have driven up the aisle on a motorbike to Metallica,” <NO1>Sarah<NO>Brennan laughs. On the day, she walked up the aisle to Sigur Ros and the couple walked down it to a string quartet version of Madness and It Must Be Love.
Brennan spent the night before the big day on top of a ladder, hanging 200 metres of homemade bunting. On sunny evenings on her balcony at home, she had stapled heart- printed burlap to baling twine. She also made all the signs and signage including the ones her nephews, Noah Brennan (six) and Ciarán Caldwell (five) carried up the aisle.
For their October wedding, they held a hot whiskey and port drinks reception followed by a buffet of monkfish and sirloin of beef. Her mother made a fruit cake that she and a friend iced because they felt the cakes they viewed at wedding fairs cost “stupid money”.
Brennan wanted to wear “a simple white dress”. Hers started life as a full-length strapless affair that she had shortened,adding a taffeta underskirt and a halterneck.
After dinner, the bride swapped her high heels for a pair of well-worn Hunter wellies so that she could tramp around the site and join the others who danced until dawn.

Simple shakshuka: spice up your mealtimes with this Middle Eastern dish
8

‘This is war’: Irish health workers on their Covid-19 crises
9