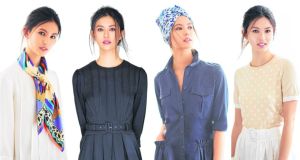 He was once known for his raincoats and for winning The Late Late Show Designer of the Year three times in succession – a feat never bettered by any other Irish designer. Then, in a change of direction, Michael Mortell dropped out of fashion to pursue another career in interiors, turning what had been a hobby into a thriving business.

After setting up a gallery at Exchequer Chambers, he opened a shop in Francis Street four years ago, specialising in mid-century furniture, ceramics, glassware and lighting all sourced primarily from Europe and becoming an authority on the subject.

It was a chance meeting with Margaret Heffernan that led to his return to fashion and the launch of a small collection for Dunnes Stores last winter. His new spring collection is now instore and another is in preparation for winter.

In addition, in October he will launch an interiors range – his first – for Dunnes consisting of table top accessories, bedside and coffee tables, sideboards, chairs, lighting, bath and bedroom furnishings – ceramics, rugs, porcelain and wood. “It’s a toe in the water,” he says. “I think it will be a starting point for flexing the muscles and have coherence and it will reflect my love of mid-century, but not ape it.”

In the meantime, his first spring/summer range consists of 14 pieces, and beady fashion eyes will spot the desirable bargains: the fully lined suede jacket and A-line skirt (€180 and €150); the pretty new spotted knitwear; sweaters with bolder zig zag motifs somewhat similar to those of the previous collection; a stylish new version of a summer shirtwaister in navy cotton; and two standout silk scarves including one in leopard print.

“It’s reminiscent of Italy in the 1950s and La Dolce Vita . . . warm evenings on the island of Capri, movies by Fellini and glamorous ladies on the Via Veneto in Rome,” he says. “I see my pieces as contemporary classics, not throwaway, but for the long run. If you take design seriously, you have to keep your eye on beauty, keep feeding your eye.”