The Mayo knitting factory that made jumpers for Japanese designer Kenzo 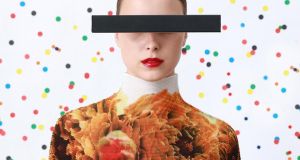 In a remote part of west Mayo in the early 1980s, an old lace-making school that had been converted into a knitting factory was making sweaters for Kenzo Takada, the Japanese designer then making his name in Paris. One of the sweaters was Kenzo’s version of an Aran knit with familiar lines of relief cabling and patterns but with a major difference.

In his design, the lines were horizontal rather than vertical and far from being white or cream wool in the traditional style, the colours chosen were bolder – emerald green and pink. These knits, forming a direct aesthetic link between the two countries, illustrated the effect of a Japanese sensibility on an iconic Irish cultural artifact seeing it in a new and fresh way.

This was at the same time that other Japanese designers in Paris were shocking audiences in other ways. It is hard today for a new generation to understand the impact of the work of what became known as The Big Three in Paris, when avant garde designers Issey Miyake, Rei Kawakubo and Yohji Yamamoto showed a new way of dressing with their sensational all black collections. Instead of cutting the clothes to the shape of the body in the conventional western way, these garments were baggy, roomy and all enveloping. Their aesthetic changed fashion and had a profound effect on western designers that continues to this day.

A new exhibition in Kilkenny, Hi Fashion, part of Kilkenny Arts Week and one of the events marking 60 years of diplomatic relations between Ireland and Japan, celebrates 60 years of sartorial history juxtaposing garments from designers in both countries. The Japanese Aran garments are not there, but the Irish designers include Sybil Connolly, John Rocha, Lainey Keogh, Úna Burke and rising stars like Michael Stewart and Richard Malone.

Gemma Williams, the London-based Irish curator who has assembled the 23 outfits which are presented together, says the exhibition “is not about compare and contrast, but a visual essay. It is loosely structured and I would like visitors to see beyond each object; there will also be a variety of film and catwalk footage to showcase garments through another lens.”

Fashion exhibitions in Ireland are few and far between and this one presents a special visual feast from designers over the decades. An aspect of Williams’ approach is to show how fashion is an outward-looking industry and how, for instance, John Rocha and Lainey Keogh “created an Irish fashion moment in the 1990s the same way as Japan was spotlighted in the 1980s, both leaving their own countries to create an impact elsewhere”, she says. How fashion is underpinned by the fusion of concept and craft and distilled by the intimate nature of individual approach and process is also highlighted.

“Japan’s support of its cultural patrimony when it comes to fashion is better than ours,” says Williams. “They see it as a massive component of culture which Ireland is only starting to do. Here industry support is minimal; fashion is not seen as a proper discipline. I wanted to keep the exhibition as broad as possible and show how inspiration and connections are made across borders.”

The exhibition, which has been designed by Steven McNamara of ROJI, runs at The National Craft Gallery, Kilkenny, until November 12th and discussions are taking place about a possible transfer to Dublin.