The many rules women are told to obey: Be nice. Be obliging. Don’t let yourself ‘go’ 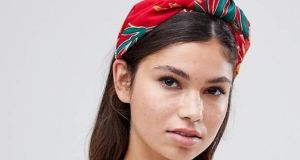 Did I ever tell you about the time my hair got dyed orange? No? Probably because I’ve consigned it to a locked vault in a secret room in a backwater of my memory. I’m only exhuming it today so that you get ‘the whole story’.

Right. As you may know, there are many rules that women are told to live by: Be nice. Be obliging. Don’t be angry. Don’t be shrill. Smile while you’re being mansplained. Ah, you know yourself, there are millions!

The one that concerns us today is: Don’t let yourself ‘go’ but at the same time, whilst you cling to the last vestiges of your youth, don’t be ‘obvious’ either.

A subset of this particular rule relates to those with dark hair. When combatting grey hair, over time, the dye must become lighter and lighter, so that eventually your hair becomes blonde. This (apparently) is because one’s skin tone also becomes lighter over the years, so it’s in the interests of ‘matching’.

Ever obedient, around the time I turned 40, when my hairdresser suggested it was time I gave up on my goth-y black hair and commenced the watering-down, I acceded. My heart was heavy – I was very fond of my black hair, but rules were rules.

But horrors! My new ‘less-black’ hair did not – as promised – suit me. It was an odd orangey-brown shade that clashed horribly with my skin tone and made me utterly miserable.

I returned to my hairdresser but he (yes, he was a man) said all was as it should be and I just needed to get used to it. Because I’ve internalised my requirement to be obliging, I acquiesced . . . but I continued to be miserable.

And then I thought, feck this for a game of soldiers! I returned to the salon and insisted that my too-black-for-my-age colour be restored! A mighty psychological tussle ensued – and it was I who emerged the victor!

That was some years ago and I haven’t had one moment’s regret.

There is, however, just one tiny issue – my roots. Because my fake colour is so dark, it makes my grey regrowth alarmingly visible. In addition, the worst of my greyness is towards the front of my head, around where my fringe starts, so it’s very obvious.

There are many things on the market to temporarily cover regrowth – powders and sprays and yokes that you dab. In fairness, they’re grand but, for whatever reason, they make me slightly depressed.

Look at this gorgeous, jaunty, little red one from Asos!