StyleFile: A butterfly-inspired collection, a jeweller to watch, and the new hags 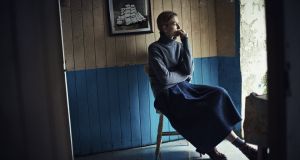 Still from Boo George’s film So for the DCCI

Celebrated London-based Irish photographer Boo George, who is known for his moody, cinematic style, is the force behind a new short film, So, promoting Irish fashion for the Design and Crafts Council of Ireland (DCCI), which makes its debut at Showcase, the creative expo. So is one of three short films which form part of the Council’s marketing strategy, to create awareness and appreciation for Irish-made textiles, accessories and apparel. Fí (meaning thread) was the first, shown last year in Dublin, Paris, New York and Tokyo. So (meaning comfort, ease, luxury) centres around a couple travelling through Ireland. “It is about lifestyle; it is short and is about comfort and luxury and also promotes urban and rural Ireland,” says Bryan McGee of the DCCI. Fashion direction is by Paula Hughes, who also styled Fí, and it is shot by Perry Ogden. The film can be viewed on showcaseireland.com from January 19th.

In the wake of her New York trunk show, opened by Irish UN ambassador Geraldine Byrne Nason, designer Jennifer Rothwell has launched her spring-summer collection called Féileacán, meaning butterfly. The collection was shot in the Natural History Museum in Dublin, the first time the museum has been used in this way.

“It was a way of raising awareness of species in danger of extinction,” says Rothwell. The Luna print, for example, is inspired by the Morpho Butterfly, known for their vivid blue wings. Destruction of the butterfly’s habitat now threatens their survival. The Ulysses print is a contemporary adaptation of the butterfly theme, with black and neon colours throughout. The collection also includes separates, unisex Donegal tweed jackets, waistcoats and trousers. jenniferrothwelldesign.com

These hinged, 18k rose gold Comet earrings, set with hundreds of rubies and diamonds are by Nigel O’Reilly. The Mayo-based jeweller, who combines craftsmanship of the highest order with a capricious imagination and flair, has been taking his work to New York in recent months, and has now established an agent whose background is with Cartier. The plan is to promote O’Reilly’s work with high-end jewellers in New York and further afield in Aspen, Vail and Palm Beach. To this end, O’Reilly will be heading back stateside this month to meet buyers and editors, and will follow with a stand-alone event in Dublin – details to be announced later. One to watch this year. nigeloreilly.com

The hag of Beara, a mythic Irish goddess (or old crone), said to herald the start of winter and associated with the Co Cork peninsula of the same name, is a far cry from a novel Irish brand selling “hags” – reversible bucket hats that turn into bags . It’s the brainchild of Amy Condell, a graduate of Ulster University born in Donegal and raised in Kenya. As an advocate of sustainability, she makes all her hags from Irish linen sourced locally, and sews them at home in Dublin with her sister and mother-in-law.

Having come up with the idea in the summer and launched an online store, she has taken part in three markets north and south – Belfast Fashion Week, Dublin Flea at the Workman’s Club and D-Light Studios’ Sustainable Christmas market. Condell has also partnered with the Irish Tree Council (like another sustainable Irish brand, Grown) and for every hag sold (€59.95), a tree will be planted in Donegal. imaraearth.com