The look of the Irish: Paul Smith’s Dublin fashion shoot 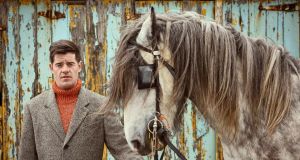 “I have always had an affection for Ireland and nice, eccentric memories of it,” says the designer Paul Smith on the phone from London who, for the first time ever, has shot his latest campaign in Dublin.

“When I think of Irish fashion, I think of fabric – linen, Donegal tweed, heathery colours, countryside. If I think of Italy, it is cashmere, deep rich colours, soft handle. Japan is Comme des Garcons, Yohji Yamamoto, extreme fashion. Ireland is about fabric.”

A British fashion legend, the Nottingham-born tailor who founded his business 50 years ago with savings of £600 is now the UK’s most successful designer selling in 73 countries worldwide and worth an estimated £300 million. The campaign shot in Dublin is for the exclusive handmade Paul Smith Collection, a premium collection designed by him and only sold in Japan. It is expensive with yen prices starting at the equivalent in €100 for a tie, €1,500 for a suit, €700 for a jacket, more than €1,000 for a coat and up to €2,000 for one in pure cashmere.

An Irish creative team, headed by London-based Alan Aboud from Rathgar who has worked with Smith for more than 25 years, along with Dublin hairdresser-turned-documentary photographer James Mooney, spent time around the city in areas synonymous with the Ireland of the early 1900s and James Joyce in particular, casting models Rudy and Trevor from the street.

Trevor, one of the original pony kids shot by Perry Ogden in 1999, was spotted by Mooney and Aboud in a carwash washing his horse and runs a horsedrawn funeral carriage business with his brothers.

Dubliners will be familiar with locations like Belvedere College, Baker’s Bar in Thomas Street, Dollymount, the Bull Wall and O’Connell Bridge, while other places include the city’s oldest stables in Vicar Lane. For Aboud, one of the best-known creative directors in the fashion, beauty and retail industry it was a kind of homecoming and the first opportunity he had in a long and very successful London career to do a commercial shoot in his home town and in his old school, Belvedere.

According to Smith, “myself and Derek Morton (Smith’s longest-serving designer) always come up with a theme for this collection. We don’t do it for the general collections, but for this, which is quite special with handmade details and all about craftsmanship, we try to work on artistic or painterly themes and James Joyce came up – he was quite a dandy and elegant so it seemed like the natural thing to go to Ireland”.

Smith’s links with this country go back a long time and he recalls many visits to the McNutts, weavers in the Downings, Donegal, to buy their tweed. “I loved the whole family – we used to meet in the big fabric exhibitions in Paris and I used to stay with John [McNutt] in the hills – his mill was in an old Methodist church on the beach if I remember rightly and cows used to roam in and out – I was astounded!” He also has a vivid memory of driving with John up to his house in dense fog. “It’s not fog” countered John, “it’s cloud”, and of his children playing the spoons when they arrived.

Some of Smith’s knitwear is made in Donegal, in Kilcar, by Fisherman Out of Ireland

Though he mostly buys his tweed from English mills in Yorkshire now, some of Smith’s knitwear is made in Donegal, in Kilcar, by Fisherman Out of Ireland, “who do a good job”, he says. “We try to use them as much as we can but the world is so competitive today so loyalty is hard to hang in there because people are pushing for price.”

A close friend is Daniel Day-Lewis with whom he has stayed many times in the actor’s Wicklow home. “He worked in the store where we do bespoke tailoring in Notting Hill for a week for his role in Phantom Thread – he loves to know all the details, the different types of threads,” says Smith. For Sony’s Men in Black spin off due for release next year he will be dressing Liam Neeson and Chris Hemsworth and other members of the cast.

Famous for his suits, his irreverence, and for having coined the phrase “classic with a twist”, Smith says that the two people who taught him were his wife Pauline who studied couture fashion at the RCA “so I could understand proportion, scale and where the suppression goes, where the waist goes in a jacket and the other person was a ceremonial military tailor – all that tailoring is constructed to make you look important, tall and elegant”.

He admits, however, that tailoring is not selling as well as it used to because many people today don’t need a suit for work, “but we are still hanging in there because we are the go- to designer if you need a suit and we show it with a pair of trainers or with a T-shirt, so not in the traditional way”.

“We can also turn our hand to sportswear as well as tailoring – I know about that because I used to be a racing cyclist.” On a plane every week, he has also developed a travelling suit that doesn’t crease in 100 per cent wool which is very popular with global travellers in navy blue, black as well as “fun colours”.

Now 72, Smith still enjoys his work enormously. He swims every day at 5am, then starts work at 6am, with two strong cups of coffee

As for womenswear, he says it was hard to resist the pressure to do it. And though the first two seasons were very successful, when demands came for more femininity – skirts, dresses – “I lost my way for 10 years but now we are actually doing well with it in France, Japan and the UK. I do the tailoring and a designer does more feminine pieces so it is a good balance. I am a bit of a bloke and I don’t have a strong feminine side!” he laughs.

His last visit to Dublin was to give a talk in Brown Thomas, Irish stockists of his main menswear collections. “It was lovely and there were a lot of people, mostly from the creative industry, graphic designers and architects – both male and female.” According to BT menswear buyer Paul O Connor, the Paul Smith collection – there are three ranges including a PS diffusion line – his clothes attract the 30-somethings working in areas like advertising and marketing “and he is known for the little details, bright linings and his accessories particularly the striped scarves and fun cuffs”.

Now 72, Smith still enjoys his work enormously. He swims every day at 5am, then starts work at 6am, with two strong cups of coffee. And, he says, “as a small company the great thing is flexibility – we can duck and dive”.