Eclectic Ennis milliner Margaret O’Connor on designing for the stars 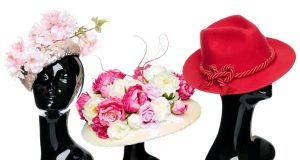 Her hat shop in Summerhill near the town centre, a testimony to her colourful style and warm personality, is replete with every kind of headdress imaginable – from show-stopping creations like those she made for Lady Gaga, to boaters, flatcaps, trilbys and little headpieces called crowns for festivals.

Though she opened the shop only last August, already it has established a reputation for avant garde, ornamental and everyday creations plus a hat-renting service for weddings, races or other special occasions. With the racing season now open, she is making hats for Ascot and is proud that Aoibhin Garrihy chose one of her black boaters to judge a best dressed racing event in Cork recently. Her most popular item, particularly for weddings, is a jewelled cocktail affair that sits neatly on the crown.

“Every time I do a new collection, it is totally different because I am constantly changing myself,” she says, sitting in the shop on a blue velvet sofa and spreading out images of her headwear, records of recent successes like winning the Global Original Fashion Design Award in China with Irish knitwear designer Derek Lawlor and the headwear for music bands like Years and Years in the UK.

There are many more interesting commissions in the pipeline including a pop-up shop with fashion designer Jill de Burca, Davina Lynch and milliner Leonora Ferguson in June and a major event in Dublin in September.

O’Connor, from a “close and caring” farming family in the Burren, earned her stripes in the world of hatmaking following a degree in textiles from GMIT. In London she cut her teeth working for internationally acclaimed milliners Noel Stewart and Philip Treacy and later qualified as a milliner at Kensington and Chelsea College. During her time with Stewart she made hats for London Fashion Week, Kylie Minogue, Britney Spears and her world tour, and Blondie while spending weekends working in pubs and restaurants. Philip Treacy taught her how to use a thimble, a skill that has stood to her “and I will always encourage young milliners to use it and not have long nails” and kept her on because of the royal wedding of Prince William to Kate Middleton.

“Millinery is very heavy handed and you have to be tough. A lot of people make smaller hats because big ones are heavier and harder on your hands to work,” she explains.

Her first collection in natural straw and acid colours following a trip to South America, called Pachamoma after the Andean fertility goddess, “made me realise I was a designer in my own right and it didn’t smell of anyone else”. In what she calls a little bit of magic dust, she acquired a priceless collection of wooden hat blocks from the son of a Covent Garden milliner. These are now displayed in her shop “and the reason I can make different hats is because of those shapes”, she says.

Her big break came when Lady Gaga wore one of her hats to an exhibition of Alexander McQueen and Philip Treacy at Somerset House in December 2013. “That changed my career and that was when everything started and I got noticed. And then I did Create in Brown Thomas and then the UK photographer and creative director James Hazlett-Beard asked to shoot my collection for Hunger magazine.”

Her latest collections are called Ethel’s Garden, a tribute to the woman who owned O’Connor’s shop in Summerhill, and Mind in Motion following her Chinese trip.

Now 32, O’Connor feels that her career is only starting and would love to design “amazing headgear for movies” or work in sculpture. “I am an eclectic designer and I was not influenced by art or fashion until I went to art college, so I was like a blank canvas. I am so into my music and my brain needs a bit of bite so that I can make something cool.”

As for wearing hats herself, she is rarely without one. “On a night out or at any event I would wear a hat because I am a brand and always want to make a sale. You never know who you could meet and you might meet someone with connections somewhere else.” That outgoing nature, boundless creativity and hard work continues to reap its rewards, though “I feel like I need to do more new things and get myself stimulated.”