Stylefile: New store showcases up to 20 designers from Galway, Mayo and Donegal, and sunny yellow is in 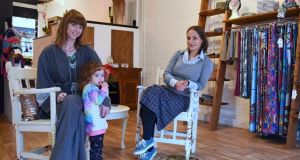 Gaylle Poppers and Ann Petrov of the Galway Designers Network

A new concept store in Galway, promoting west of Ireland designers, has opened in the Corn Store, Augustine Street opposite Charlie Byrne’s celebrated bookshop. Called the Galway Designers Studio House, its founders Gayle Poppers and Ann Petrov are two fashion designers and mothers of small children who set up the Galway Designers Network as a platform for independent designers with a view to expanding small businesses.

Their new store showcases up to 20 designers from Galway, Mayo and Donegal offering a “rent a rail” scheme with profits from each piece going directly to the designer. On offer is a mix of casual and occasion wear, knitwear, jewellery and millinery. All are handmade and most are one-off pieces. There’s also a working sewing studio, a workshop space which can be rented or used for fashion photoshoots, and an instore magazine.

There is something about the combination of black, yellow and white that is summery and fresh and can take on many moods and variations. A good way of brightening up a black wardrobe is to inject a dash of yellow depending on the appropriate shade. This lovely yellow jacquard prom skirt, €180, and black knit top, €105, (also in cream, hot pink and pale blue) are from Fiona Heaney’s new FeeG collection which also includes some asymmetrical pink and white stripe bustier dresses, €305 (also in navy and white stripe) and new takes on the familiar dress and coat combination. Fifteen years old this year, FeeG continues to be an Irish export success and is now selling to more than 120 boutiques, with customers mainly in Ireland, the UK (where stockists include Fenwicks), Spain and Germany. feeg.ie