The fantasy of fashion can offer much-needed distraction 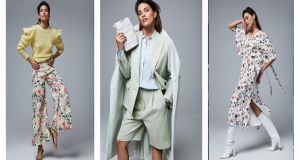 Easter Sunday is a time traditionally associated with rebirth and renewal, and in fashion – fresh and new ideas for spring

“If we winter this one out, we can summer anywhere” Séamus Heaney.

It’s Easter weekend, a time traditionally associated with rebirth and renewal, and in fashion – fresh and new ideas for spring. Banal though highlighting trends in the present climate may be, clothes, like other aspects of cultural life can lift the spirits in times of crisis, a distraction from more worrying preoccupations. The jewelled and embroidered face masks on the catwalks and on Billy Eilish at the Grammy Awards made their own comment on present times.

Rereading Theodora Fitzgibbon’s account of living under siege in war torn London and Paris in the 1940s, waiting for bombs to drop at any point, is a reminder that fear can be experienced and fought in different ways. Just look at the defiant quarantined Italians and the way music and comedy have been used to cheer people up, ease anxiety and relieve tension in these disquieting and unprecedented times.

Unlike today, ordinary citizens in the 1940s knew only the barest of facts of what was happening (though they could keep together – no social distancing then) “and rumours only increased the feeling of oppression and fear” wrote Fitzgibbon. “And fear had its grip in Paris in June 1940. Events happened so quickly”. Yet there was time to don her mother’s old sequined dresses from the 1920s, dance away the night and forget about the looming horrors ahead.

This shoot was planned before Covid-19 became a threat. The idea was to show some of the new season’s offerings and how to wear them. Without downplaying the seriousness of what is happening, this may seem irrelevant to many, but to others at least it’s a chance to dream and enjoy some beautiful and distracting imagery – think of it as armchair fashion.

Price points may be high in some cases, but there are always ways in which the looks can give ideas as to how pieces can be put together in other ways for less. However, at a time when many are thinking more seriously about sustainability, the idea of investing in something that will last rather than a throwaway notion is a strong one.

Styled by Sinead Keenan, here are some illustrations of how to reboot a tailored suit without too many literal references to the 80s, what to put with a full skirt, how shorts suits can work when the cut is right, different ways of putting colour and print together, mastering utility in a fresh way and why the trenchcoat (a first World War creation) continues to be a fail-safe staple.

All clothes can be purchased online from Brown Thomas, Dublin. www.brownthomas.ie