The family weaving magic at their woollen mill in Co Clare 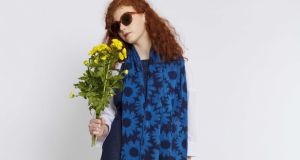 Well known as Edna O’Brien’s birthplace, picturesque Tuamgraney in east Clare, on the shores of Lough Derg, is a popular tourist stop on the way to the Cliffs of Moher. Pride of place in the village is McKernan’s Woollen Mill, where Eugene and Anke McKernan, an Irish-German couple, have woven a life for themselves and their family since 1985.

Their scarves – for all seasons – are now sold in boutiques, concept stores and museum shops all over Ireland, Europe and North America. Visitors particularly enjoy tours of the mill.

At the recent Showcase in the RDS, McKernan’s stand was inundated with buyers from all over the world drooling over their scarves in wool, cashmere, merino or silk, in a rainbow of colours and textures. Ten years ago they replaced their handlooms with 120-year-old cast iron Hattersley shuttle looms (being narrow, they are ideal for weaving scarves), and in 2012 purchased their first knitting machine. They now have many more, and knitwear has taken on a life of its own.

The pair met in their 20s in Dublin by accident. Eugene from Marrowbone Lane in Dublin, a former altar boy who joined the army for two years, was having a pint in his local, the Brazen Head, when Anke, who had been working as a weaver in McNutts of Donegal, walked in. “And that was it,” he recalls.

The couple moved to Germany, and into an old castle in Wunstorf that had fallen into rack and ruin. “We started weaving in the bedroom and our first child was born there,” Eugene recalls. Offered €13,000 to leave after the Berlin Wall came down, they packed up their looms and moved to Ireland with their children. Taking a short cut from Galway, they ended up in Tuamgraney, buying the old RIC barracks in 1989 “with the money and three pints”, according to Eugene.

Initially they moved back and forth to Germany buying scrap yarn and selling at Christmas fairs. Eugene, who freely admits he is colour blind, acknowledges that Anke, who always loved making things, is a “colour genius”. They now have a team of craftworkers, some local, others from all over the world – New York, Tel Aviv, Slovenia, Cracow, Edinburgh and London.

“Together we design, weave, knit, warp, wind, beam, tie, unpick, mend, sew, link, wash, label, press, iron, steam and, when all is done, we package the scarves and send them out in the world.”

Acccording to Anke: “I am a weaver, but a designer at heart. We have so much experience, some 800 different yarns in 20 different qualities in so many colours. We have 20 machines specialising in scarves – it was the only way we could make money. My dream is to sell to museums [with my own designs], and this is happening big time – including the National Gallery in London. We made a scarf for the Raphael exhibition there, matching the colour and feel [of the paintings]. This has brought us in another direction; it’s a new thing for us,” she says. “I love doing this and am buzzing at the moment.”

What Eugene is most proud of is having been able to give his kids a fantastic education. One son Jacob, an editor, is based in Berlin organising seminars, while Ben lives in London and works in product development. Their daughter Niamh has a master’s in movement and works for big stars in the Hollywood movie industry. She masterminded this shoot for their latest collection using locals as models – another example of the teamwork at McKernans where a sense of fun is combined with a passion for the craft, and where “working with our heads, hands and hearts gives us great satisfaction”.