Hilary Fanin goes to The Jersey Boys: ‘In the name of god, how did we survive all that crap?’ 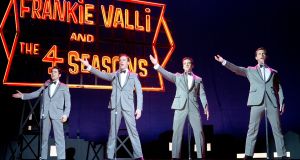 The Jersey Boys tells the story of Frankie Valli and the Four Seasons “and reproducing their sound with a kind of military proficiency”.

I’ve just googled Frankie Valli to find out how to spell Valli and now know more about the singer (a man made almost entirely of perspex, dental floss and luncheon meat) than I ever wanted to or suspected that I might.

According to Google, along with questions about Valli’s hit songs and marital status (three divorces and a long and tumultuous affair with a hairbrush), people also ask: what is Frankie Valli worth? Why do people also ask that?

What difference is it going to make to anyone’s paltry life that the New Jersey-born singer, who began life as a corner-boy crooner and became famous for his “head voice” (I think that means the distinctively nasal tone he employed, a sort of entrancing nostril reverb), is today worth $80 million( €70,426,400)? See the way I deftly slipped my diligently researched Valli facts in there?

Anyway, the fact that this man, due to a happy adenoidal accident, is worth such a lot of moolah came as no surprise to me, having recently been invited to see his musical biography, Jersey Boys, at Dublin’s Bord Gáis Energy Theatre, and witnessing at first hand his continuing appeal.

Its depiction of romantic life in the 1960s served as a stark reminder not to indulge, under any circumstances, in time travel

After having so much good clean fun last time we went to the theatre together, to see the musical Calendar Girls, I once again dusted off my friend Jayne and brought her to Jersey Boys with me.

Finding our seats and slipping out of our attractive waterproofs, we settled happily among a benign audience of musical theatre-goers, mostly folk of our own vintage, each one of us having made it to our seats despite our slight twinges of lumbago.

The plot of Jersey Boys is deceptively simple. It’s an everyday tale of disaffected youths with strategically placed vocal cords, swapping lives in and out of the penitentiary for those of multimillion-dollar recording artists. Did I say deceptively simple? I’m sorry, I just meant simple.

From Newark to New York, they popped their tranquillisers at various Formica-topped kitchen tables, or banged their beehived heads off the cupboards

What was entertaining about this tale of rags to riches, however, as well as the impressive vocal mimicry of a talented cast, was its depiction of romantic life in the 1960s, which served as a stark reminder not to indulge, under any circumstances, in time travel.

The women, as they were portrayed in the show (no doubt with some degree of biographical accuracy), were a beleaguered bunch. From Newark to New York, they popped their tranquillisers at various Formica-topped kitchen tables, or banged their beehived heads off the cupboards while waiting for their rock’n’roll menfolk to come home.

The alternative to this poisonous domestic ennui was to eschew the role of doomed wife altogether and instead find a throbbing Studebaker and perch prettily on its fender while the boys in the band hit the gas and revved things up a bit.

Throw into this headily unreconstructed mix a couple of other stock characters, such as a mincing music-industry queen (gently poached in fake tan and left to dry out in the LA sunshine) and various slinkily compliant dames in nylon negligees (one of whom murmurs to virginal singer-songwriter Bob Gaudio “you can unwrap me upstairs”), and hey presto, it’s late December back in ‘63 - and what a night that turned out to be.

At the end of this tale of divided loyalties and royalties, which includes deception, suicide, cars, bars and singing guitars and is peppered with as much potential for high drama as a Greek tragedy, the audience got to their feet. Jayne and I stood too, and swayed along while the performers efficiently worked their way through a medley of falsetto-sprinkled hits.

Leaving the theatre I was aware of the sheer volume of middle-aged couples who had found their umbrellas and come out for a night of nostalgia. They looked happy - maybe, like me, they were revelling in the slow demise of the arse-pinching sexism I remember from my youth (or maybe they just liked the tunes).

“In the name of god, how did we survive all that crap?” Jayne asked as we made our way along Pearse Street in the stuttering rain. She meant the era, not the show, which does exactly what it says on the tin, telling the story of Frankie Valli and the Four Seasons and reproducing their sound with a kind of military proficiency.

“We were only children, I suppose,” she continued. “We just thought all that baloney was normal.”

“Shut it, numb nuts,” I replied in a lousy Newark accent. “You only gotta remember one thing, sweetheart: big girls don’t cry, they just get even.”

‘My days of eating meat at every meal are over’