There’s a plant for almost every type of shady spot, but it pays to give the soil a helping hand 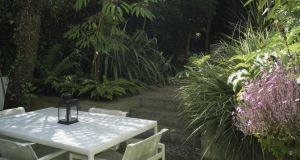 Like most people, I don’t have a woodland garden. Which is not to say that I don’t have plenty of shady spots in the garden that are eminently suitable for a range of woodland plants. Semi-wild corners beneath the shadows of large established deciduous shrubs and trees for example, where many plants flourish in the dappled light of springtime before it’s lost to summer’s dense canopy of leaves. Or a patch in the lee of a north-facing wall, a place where shade is a constant and where soil moisture is inevitably less than you’d like. Or even spots within a sunny mixed border, where spring-flowering bulbs are happy to discreetly spend their summer months, lying dormant beneath the temporary leafy shadows cast by summer or autumn flowering herbaceous plants.

Typically these are spring flowering; among them are hellebores, dicentras, erythroniums, Dodecatheon, aquilegias, polygonatums, some (but not all) species of Primula, and pulmonarias with their pretty flower clusters and their handsome mottled foliage. A few outstanding shrubby examples include the summer-flowering Hydrangea ‘Annabelle’, Viburnum plicatum ‘Pink Beauty’, Sambucus ‘Black Lace’ and the winter-flowering witch hazels.

There are also many useful summer-flowering biennials and perennials that will do well in these conditions, including foxgloves, astrantias, Acanthus and some of the hardy geraniums – for example varieties of G. endressi, G. himalayense, and the long flowering G. ‘Ann Thomson’. Another is the recently introduced, award winning Anemone ‘Wild Swan’, a supremely long flowering perennial with large, graceful white/lilac flowers from late May until November. For autumn colour, try Japanese anemones (Anemone x hybrida) and monkshood. Some grasses also do just fine in dappled shade, including the lovely Chionochloa rubra, and the golden-leaved Milium effusum ‘Aureum’.

Many spring flowering plants will also happily inhabit the lower, shady layers of a sunny border, as long as the soil doesn’t dry out too much in summer. Examples include snowdrops, crocus, scillas, snowdrops, narcissi and camassias, as well as Ajuga.

There are even plants that will cheerfully meet the considerable challenge of dry shade. These include the easy, lime-green flowering perennial known as Lady’s Mantle (Alchemilla mollis), older varieties of low-growing, spring-flowering Epimedium, including E. warleyense (evergreen, orange flowers) and E. ‘Niveum’ (white flowers) and the lovely, silver-leafed, blue-flowering perennial known as Brunnera ‘Jack Frost’. So will the slightly thuggish sweet woodruff (Galium odoratum) and the dainty wood anemone, Anemone nemorosa. Again, most of these are spring flowering, but there are other, later flowering plants to usefully extend the season. These include the clump-forming, hardy geranium, G. macrorrhizum, while for autumn colour, try the low growing, purple-flowered, evergreen Liriope muscari or the dainty, typically pink-flowering Cyclamen hederifolium which produces low mounds of decorative, silvery foliage. Ferns are another very useful group of plants for dry shade; examples include the sculptural, evergreen soft shield fern, Polystichum setiferum. For a dry shady wall, try the shrubby, white-flowering Hydrangea petiolaris

Some – but not many – plants will even grow in deep shade, as long as the soil is moisture retentive. One example is the low-growing strawberry saxifrage, Saxifraga stolonifera, an evergreen perennial with rosettes of silver-veined leaves and wine-red bottlebrush flowers followed by ornamental seedheads. Others include the evergreen, spring-flowering Oxalis acetosella var. rosea, and varieties of the ground-cover plant, Vancouveria, both available from Mount Venus, the Dublin nursery that specialises in many choice woodland plants.

As for impossible shade … Okay, I made that last one up, but it’s true to say that there is a certain kind of shade – an especially deep, dark and gloomy one – which when combined with especially bad soil, a horribly dry, infertile and compacted one, spells certain death to any plant unfortunate enough to be asked to grow there.

Which leads us on to the matter of soil type and structure. A few woodland plants, for example the enchanting blue-flowered Himalayan poppy (Meconopsis) or trilliums, require neutral to acid soil. So if you garden on very alkaline soil, it makes sense not to grow them.

Soil pH aside, if woodland plants could speak, most of them would ask for a cool, friable, free draining but moisture retentive soil enriched with layers of crumbly leaf-mould. But they can’t, and so too often we give them a powdery, dry, starved and compacted excuse for a soil – at which even weeds turn up their noses – in the vain hope that they’ll generously forgive us and grow regardless. Instead they die, and we then bitterly reproach ourselves. So be kind to these shade lovers and add plenty of organic matter in the shape of leaf mould, homemade garden compost and manure before planting, especially where the soil is poor and dry. Your plants will thank you for it. For a useful guide to woodland plants, pick up a copy of the recently-published Designing and Planting a

For a useful guide to woodland plants, pick up a copy of the recently-published Designing and Planting a Woodland Garden, by Keith Wiley (Timber Press)

Continue sowing seed under cover (see last week’s article), for module-raised plants that can be transplanted out later in the season

At this time of year it’s very important to protect emerging plants from slugs and snails (below right). Giving borders a good tidy up by removing dead/fallen foliage helps, as does hoeing, which exposes eggs to birds. Iron-based environmentally-friendly pellets are also available from most good garden centres.

Autumn isn’t the only season for planting bulbs and tubers. There are also plenty that can be planted into pots now, for moving out into the garden later in the year, where they’ll give a welcome splash of colour. Examples include dahlias, lilies. gladioli, irises, anemones and Liatris, as well as Acidanthera. Recommended online suppliers include Mr Middleton (mrmiddleton.com) and Peter Nyssen (peternyssen.com).