Summer dresses: Is there not still room for a little joy?

In many shops, mannequins stamp the point at which society paused and fashion became more PPE than pastel pink 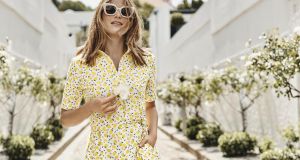 Summer dresses typically suggest carefree holidays, festivals, weddings and other social gatherings in the long months of June, July and August. But this year, this anticipated future has not arrived. Time is out of joint. Instead of discussing lace dresses, pastels, florals, and exaggerated sleeves and waistcoats, we discuss PPE, face coverings and masks as the pandemic drags on and the normal activities associated with the season fail to materialise. The trends have gone, along with Electric Picnic, Bloom and all those other cancelled celebratory events and festivities.

“Pandemic fashion is ‘hauntological’, stuck in the precise moment in which the world changed,” says horror academic and consultant Dr Sarah Cleary, a lecturer at TU Dublin, who is a regular commentator on pop cultural issues and who also has an abiding love of fashion. Queueing for a supermarket recently, she passed a New Look shop and staring in the window at the mannequins in all their unsold summer gear, it suddenly dawned her how ghostly they seemed.

“In the ubiquitous spring shades of pastels and florals, they seemed to time stamp the point at which society paused and fashion became more PPE than pastel pink. These sad little mannequins were essentially ghosts akin to Miss Havisham,” she said referring to the jilted Dickens character who insisted on wearing her wedding dress for the rest of her life.

“You would always get a new dress for a wedding and I have had weddings cancelled. People are trying to be positive but the ghosts of spring and summer filled with nights out, festivals and weddings will continue to haunt us through glass windows,” argues Dr Cleary who draws from the philosopher Jacques Derrida’s concept of hauntology in which “the profound failure of a planned future leaves us displaced, haunted not only by the past, but also by a non-future”.

Cleary is an authority on the horror genre which she sees as a serious and powerful form of cultural commentary. She can cite many examples of how clothing is used in horror comics and films – for example in Dawn of the Dead, the 1978 movie, one of the female protagonists is sitting in front of a vanity mirror and applying heavy make-up. “It is a sad scene – she isn’t going anywhere – but is surrounded by all these fashions and has access to anything, but she doesn’t want any of it. Karl Lagerfeld said that fashion is not only about clothes, it is also about change, but nothing is changing at the moment, just paused.” The fashion world may be in turmoil, but Cleary believes that it will be more interesting to see what happens in the wake of this pandemic. “The simple things in life are often those that are psychologically loaded and fashion reflects the culture and mood of the day”.

Cleary also points about how serendipitous the planned Met Gala was this year with its theme “About Time: Fashion and Duration” exploring philosopher Henri Bergson’s concept of “la duree”, time that flows, accumulates and is indivisible and how clothes generate temporal associations that conflate the past, the present and the future. It is now cancelled, of course. Virginia Woolf was to serve as “ghost narrator” of the exhibition.  “Fashion for me is now a ghost,” Cleary asserts.

“It is now just about covering – there are certain tropes in horror when the character wears the same clothing every day. We need a certain flow to keep going and right now we are stuck, so that little summer dress is highly political and philosophical. Do we really need it? I think people will change the way they shop and buy better and buy less.  Our social lives are about movement and going from one place to the next and the only way that fashion works is movement. Until then, it is a ghost haunting us about a future that never arrived.”

Whatever about these spectral thoughts, I couldn’t resist making a selection of summer dresses available online – there’s even one, appropriately called the “cocoon”. Is there not still room for a little joy, frivolity and daydreaming? Can we allow for the transformative power of a summer dress to lift the spirits even in isolation and maybe with a promise of better times ahead?

Should we stay or should we go? Readers on holidaying abroad this year