Standing tall: feminists can wear heels if they want

Emma Thompson is wrong if well-meaning: a heel advocate can also be a feminist. Fashion and feminism both operate on a spectrum with considerably more than 50 shades of grey 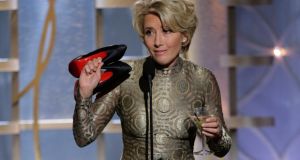 When Meryl Streep gave the best actress gong to Emma Thompson at the National Board of Review Gala recently, the two stole the show for their rabble-rousing speeches bursting with affection for each other and their craft.

For me, however, a bum note was struck when a shoeless Thompson proclaimed: “I’ve taken my heels off as a feminist statement, really, because why do we wear them? They’re so painful. And pointless, really. You know, I really would like to urge everyone to stop it. Just stop it. Don’t wear them any more.”

Then, at the Golden Globe awards last weekend, Thompson returned to the theme, pointing to the red sole on her Louboutins and saying, “I just want you to know that this red is my blood”, before throwing the heels away.

Which is fair enough. While I can’t argue with Thompson’s feminist intent and how well she means, she seems to be suggesting that all high shoes are uncomfortable. While you certainly can’t accuse a high heel of being as snug as a slipper, likewise you can’t categorise them all as contraptions of patriarchal torture. I own and regularly wear several pairs of comfy heels. A woman can be a heel advocate without compromising her ability to walk, skip and run for the bus. A heel advocate can also be a feminist.

There is no black and white. Feminism and fashion both operate on a spectrum with considerably more than 50 shades of grey. That’s why, when I read a recent editorial by Feminist Times editor Charlotte Raven headlined “A feminist in high heels is like Dawkins in a rosary”, my Spiderwoman sense started to tingle. In her editorial, Raven deals with continually being asked if feminists can wear high heels with a mixture of justified disgust and totally unjustified rhetoric. “High heels are a form of self-harm,” she says.

Really? Unless your shoe is made of razor blades and still-smoking cigarette ends, to suggest that wearing heels is a form of self-harm is hyperbole. To suggest such a thing is insensitive to people who do or did self-harm. Wearing high shoes is to self-harm is what eating an extra large pepperoni pizza in one sitting is to self-harm. It’s not good for you, but taken in moderation it ought not to have a negative impact on your life. If you like pizza and shoes as much as I do, it might even make your life a little better.

Is it like the old days? Corsets not
For hundreds of years, women have been required by the dictates of fashion to wear clothes that were outright unhealthy or dangerous. Up until the 1920s, corsets that would compress the ribs and vital organs were a part of everyday life. Foot binding, a practise that left women unable to stand or walk for a long period of time, was only outlawed in China in 1912. Those dictates are now long gone. What was a requirement is now a choice, and one that many women make of their own volition.

“I think you can be a pretty-much-anything-loving feminist,” says Jean Sutton from feminist magazine Siren. “The idea that feminism limits your choices regarding your personal interests is the reason the pursuit for gender equality gets a bad rap from people who should know better”.

There doesn’t have to be a conflict between feminism and traditionally feminine pursuits, she argues. “I read a lot of romance fiction, and would also like equality to be a thing. My interest in sassy heroines finding love in Regency and Victorian England is not incompatible with my being registered to vote.”

‘This is who I am’
Men shouldn’t tell you what to wear, and neither should other women. That is the true nature of gender equality, and of fashion as well. Feminism allows women to shout “this is who I am”. Fashion ensures that the clothes can do the shouting.

Mary McGill, a founder and editor at women’s website fanny.ie believes that having “the time, energy and platform to have ongoing bust-ups about the merits of shoes and make-up is a luxury disproportionately afforded to middle-class white feminists with a platform.”

“Debating the meaning of material things will not directly transform the lives of most women,” she says. “Policies and protests have and will transform lives, and you can fight for them in whatever footwear you fancy.”

The answer to the question “can a feminist wear heels?” is simple. Is the feminist in question in possession of a foot or pair of feet? Are those feet attached in some way to his or her legs? Then, yes, a feminist can wear heels. A feminist can also wear socks, slippers, trainers, brogues, slip-ons or flippers if the mood or situation calls for it.

Emma Thompson has every right to go barefoot, because a feminist can wear whatever she (or he) wants. It’s no one’s business but her own.